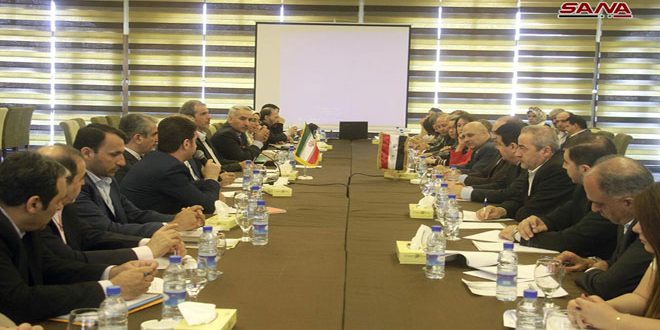 On Monday, an meeting was held between an economic delegation from Iran and economic players from Syria to discuss the realities of the bilateral cooperation agreements between the two countries and the mechanisms to activate and develop them.

During the meeting, held The Dama Rose Hotel in Damascus, both sides underlined the necessity of developing and activating the agreements signed between the two countries. They stressed the need to put them within a long-term strategic agreement that will act as a comprehensive framework for all the agreements in a way that would contribute to upgrading of economic relations between the two sides.

Participants of the meeting also tackled the realities of customs cooperation, calling for a reduction in the period of customs clearance to facilitate the arrival of goods as soon as possible and to reduce the costs.

The meeting also dealt with means of expanding domains of trade exchange between the two countries to include new types of products in a way that would achieve an increase in the rate of bilateral exchange.

The participation in expos organized by the two sides and the mechanisms to establish permanent centers for national products in both countries were also on the table.