Speaking to Zaman al-Wasl, the opposition negotiator reveals the focus of the next round of negotiations in Astana 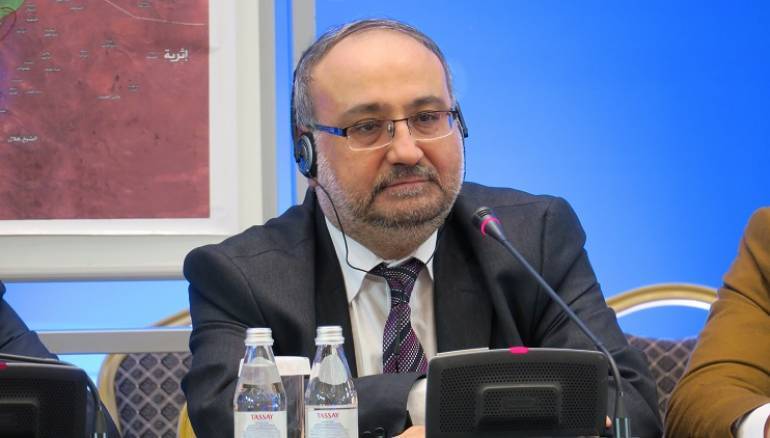 The upcoming round of negotiations in Astana is likely to achieve progress on the issue of detainees in Syria, the head of the opposition’s delegation has revealed, hinting that Russia is serious about settling the issue.

Speaking to Zaman al-Wasl, opposition figure Ahmed Tomeh said that Tehran is obstructing progress with the detainees file, noting that Iran is drowning the negotiations in details to evade dealing with the problem. As the Assad regime refuses to acknowledge the existence of lists of detainees, Tomeh has called on human rights organizations to do more to settle the issue. The following is a transcript of the interview.

What is your feedback on the eighth round of Astana negotiations?

The most important positive remarks on the eighth round of the Astana consultations is that there are now specific topics on the table that are being discussed, especially the issue of detainees and ensuring their release. In this round, there was extensive work on the issue of releasing the detainees, so when there was a consensus about my presidency of the Astana (opposition) delegation, I began to study the files, and I found that the most important file where pressure can be applied is the detainee file.

We have spoken extensively and in a focused manner with the Russian and American sides and even with the United Nations about the need to make progress on this file. We had sessions with these delegations. Of course, the Turkish side strongly supports us in this file.

Did you feel the Russians are serious about the issue of detainees?

I expect that Russia wants to make progress in this file, and it wants to push the Iranians specifically to be flexible about this issue, especially since this issue can push the political process forward in Syria.

Have you talked to the Russian side about the details?

Yes, of course, we told them that if you want to move forward with the political process, something must be presented and this is either releasing the detainees, lifting the siege on the besieged areas, or increasing the areas of de-escalation.

What is the issue of the next round?

In the next round, we have the opportunity to put more pressure on the detainees file, although we did this in the previous round as well and we are adopting the formation of the working group on the detainee issue.

What is the Iranian position on the issue of detainees?

The Iranians have been evading decisions over a mechanism for releasing the detainees for several months. Since May, for the first time, a mechanism was put forward for the release of the detainees under the observation of the United Nations. Since then, the Iranians have been obstructing it [the mechanism] by various means. One of these means is to sink the other parties in details of other topics. For example, entering into the details about the de-escalation areas in order to waste time.

Do you expect the detainees to be released?

I expect this, and we hope that we will achieve this in the next round. What has been achieved is the establishment of a special working group on this subject. It is considered a positive point as the Assad regime will not be able to evade this issue. Next time we will enter into other details such as the lists of detainees and the mechanisms for their release, as well as the involvement of the Red Cross in this issue. It is in our interest to involve them (the Red Cross) so that the organization can enter prisons of both sides, as well as the security branches.

Do you expect to that Sochi will be held according to Russia’s wishes?

Russia is in dire need of the approval of many international and regional parties, and here is another question: Are the Russians holding the conference alone without consensus with Turkey, the United Nations and some regional countries, other than the United States. It is correct America has no desire to impose everything it wants, but at the same time, they can easily sabotage what they do not agree with.

Have the invitations been sent out?

No invitation has been made so far, but some people have been invited, informally, where they were asked if they were ready to go and they agreed and considered this scene an official invitation to the conference.

What is the role of the political leaders in the administration of Deir-ez-Zor after the demise of the Islamic State (ISIS)?

This is one of the points that we had much hope in and in Astana we spoke about increasing the number of de-escalation zones and adding Deir-ez-Zor and Raqqa to the deal, but this did not receive any response from the Russians. In my view, local leaders do not have the opportunity to work in these areas because there are areas under the control of the regime, and under the control of the Syrian Democratic Forces. As such, independent local councils representing the people of the city cannot be organized as they cannot reach it.