In its tenth annual report on Enforced Disappearance in Syria, the SNHR reports 102,287 forcibly disappeared individuals since 2011, according to Zaman al-Wasl. 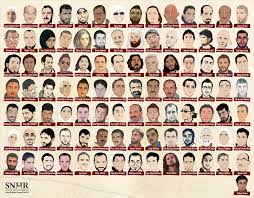 The Syrian Network for Human Rights (SNHR) issues its tenth annual report on Enforced Disappearance in Syria on the occasion of the International Day of the Victims of Enforced Disappearances August 30th, in which it emphasizes that the disappeared persons in Syria and their families suffer a constant sense of grief and loss.

The report reveals that the number of people detained since March 2011 who still remain forcibly disappeared as of August 2021 has now reached at least 102,287 individuals, the vast majority of whom were detained by the Syrian regime, which disappears people with the aim of destroying them and intimidating the entire population.

The 49-page report, which provides details on a large number of enforced disappearance incidents, as well as testimonies from victims’ families, reveals that the phenomenon of enforced disappearance in Syria is organically linked to the phenomenon of arbitrary arrest, with most of those subjected to arbitrary detention going on to be classified as forcibly disappeared. The report adds that the Syrian regime has targeted participants in political demonstrations against its rule with widespread arbitrary arrests since the early days of the popular uprising in March 2011, and has systematically used enforced disappearance as one of its most notorious tools of repression and terrorism aimed at crushing and destroying political opponents simply for expressing their opinion; the regime has also harnessed the capabilities of the security services and its tens of thousands of personnel to this end.

The report explains that the first years of the mass uprising saw the highest percentage of enforced disappearances because the demonstrations were taking place intensively, and within areas under the control of the Syrian regime, with the massive scale of the arrests and disappearances making the Syrian regime the worst globally in the twenty-first century in terms of forcibly disappearing its citizens, as the report notes.

The report adds that in the areas where the Syrian regime regained control, hundreds of cases of enforced disappearance have been documented against the people of those areas, all of which confirm the Syrian regime’s continuing endeavors to persecute and punish even the most peripheral participants in the popular uprising against it.

As the report reveals, all parties to the conflict and the controlling forces have practiced widespread arbitrary detentions and enforced disappearances of Syrian citizens in connection with the armed conflict, within the areas under their control, with the aim of intimidating political opponents and subjugating society in their areas of control. The report further explains that the repercussions of the crime of enforced disappearance are not limited to the victims only, but also extend to their families, who suffer from loss, stress, years of waiting, and absolute helplessness, in the absence of any legal procedures they can take to assist their loved ones.