Ongoing economic problems have forced women and children to join the employment market, but salaries are not meeting the cost of living writes Iqtissad. 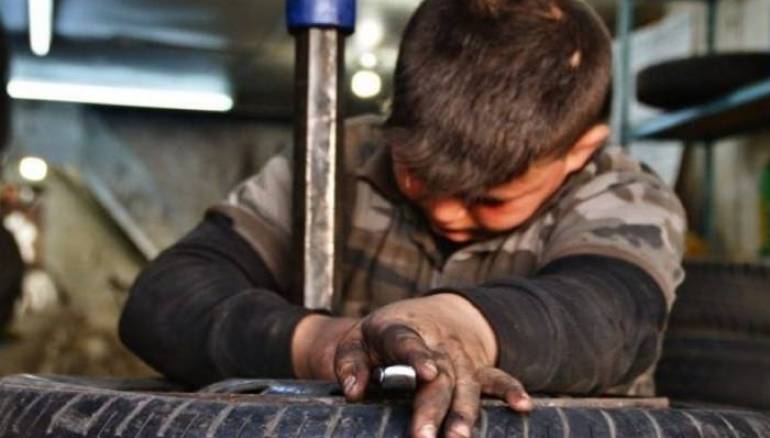 Poor economic conditions and lack of resources have forced many women and children in the southern province of Daraa to seek jobs commensurate with their physical potential, and to provide them with a temporary source of income, which contributes to meeting some of their essential growing needs.

Umm Mohamed, a 40 years-old widow who lost her breadwinner in a battle between Free Syrian Army and the regime forces four years ago, says that she is forced to work seasonal agricultural jobs, no matter how difficult the work, in order to secure the basic needs of her family such as food and water.

The mother of three children explained that her monthly income ranges between 60,000 and 75,000 Syrian pounds, and sometimes more, and yet it is not sufficient for the minimum requirements of her family.

She said that she works from 7:00 am until 3:00 pm, with a daily wage estimated at between 4,000 and 5,000 Syrian pounds, pointing out that this amount is barely enough for food, drink, and detergents, in light of the exorbitant costs in the country.

She added, “I always seek an excuse for those close to me for failing to provide assistance, for me and my children. Everyone suffers from bad financial conditions and all the people’s conditions are similar.”

For her part, Anaam. S, 30, said that she does agricultural works, such as land cultivation, olive harvest, tomato pickling, and other agricultural work whenever she can, indicating that she is forced to work because she supports a family of two children and an elderly father and mother (her parents), after the regime arrested her husband three years ago.

She added, “In the past there were associations and guarantors, they used to provide in-kind and material assistance to the detainees’ wives, widows and orphans. But after the regime took control of southern Syria, no one would dare to offer anything for fear of prosecution, so everyone is forced to search for a livelihood.”

Meanwhile, Amer, 15, did not want to rely on his mother to secure the family’s expenses, pointing out that he left his school to join the labor market in a bicycle repair workshop.

Amer decided to take the shortest path, in order to find a job, and learn the profession of repairing bicycles, which he loves so much.

He added, “I would have liked to stay in school alongside my friends, but my family’s circumstances are difficult. He pointed out that he has now mastered the profession, and he collects between 2,000 and 2,500 Syrian pounds a day, contributing to securing some of the family’s needs.

Sohail Ahmed, a sociologist, says that work is an essential need to secure an income that preserves the dignity remaining for a person. He pointed out that the poor economic conditions, the lack of resources, and the absence of the main breadwinner for the family are all reasons that pushed women and children into the labor market.

He added that the absence of charitable societies and welfare institutions, and the regime’s lack of interest in orphans, widows, and wives of the dead and detainees, made this army of orphans and women go to the market to search for work to secure some of their needs.