Graduate doctors in rebel held areas of northern Syria are having to take to the frontlines of the battle against COVID-19, as the virus spreads through the area writes Al-Araby Al-Jadeed. 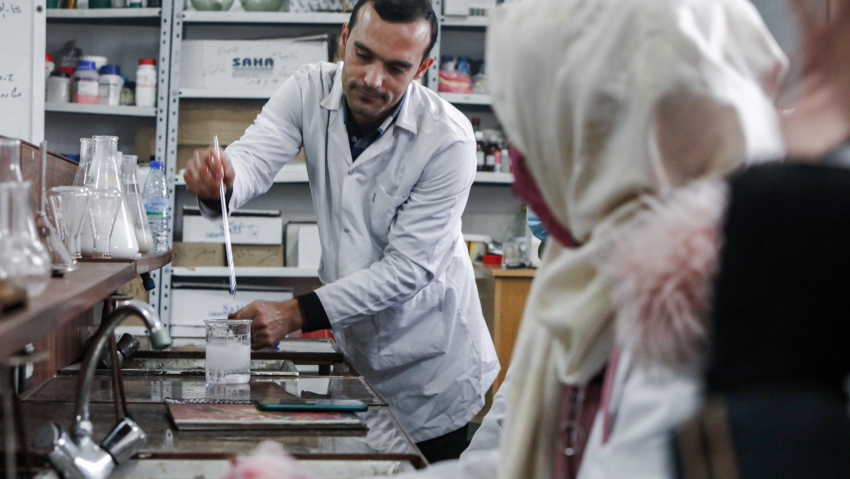 Mohammed Mostafa al-Mohammed started studying medicine in rebel-held northern Syria to help the victims of war, but instead he has graduated into a world battling the novel coronavirus pandemic.

The 29-year-old graduate from an opposition-backed university had expected to be tending to the wounded under the threat of bombardment by the Russia-backed Damascus regime.

“Our dream is to build Syria and treat the sick,” Mohammed, 29, told AFP at his graduation ceremony in the town of Azaz in a part of Aleppo province controlled by pro-Turkey rebels.

But “we’re facing a difficult challenge” with the coronavirus, said the rescue worker turned doctor.

Humanitarian workers fear any further rise in novel coronavirus cases would be disastrous in northwestern Syria, where around half of three million people live in overcrowded camps or temporary shelters after being displaced by conflict.

In Idleb and adjacent parts of Aleppo province, opposition officials have recorded almost 15,766 novel coronavirus infections in total, including 166 deaths.

Around two-thirds of all confirmed Covid-19 cases in northwestern Syria have been announced over the past month.

Mohammed was among the first 32 doctors who graduated from the “Aleppo University in Liberated Areas”, an institution founded in 2014 and backed by Syria’s political opposition.

Dressed in dark blue and green graduation gowns, caps, and face masks, the new doctors lined up on stage in a hall packed with friends and family.

Extending their right hand in front of them, they recited the Hippocratic Oath in unison in Arabic.

Mohammed, who hails from eastern Syria, was delighted to finally be graduating after the war forced him to put on hold his studies in 2012.

For two years, he volunteered as a rescue worker to help those wounded in bombardment on rebel-held areas, before resuming his studies from scratch in 2014.

“We were constantly exposed to air strikes and artillery fire,” he said of his time with the Syrian Civil Defence first responders known as the “White Helmets”.

Syria’s war has killed more than 380,000 people and displaced millions from their homes since starting in 2011 with the brutal repression of anti-government protests.

It has also ravaged a large part of the health sector and pushed 70 percent of health workers to flee the country.

Doctors who stayed behind have had to battle Covid-19.

The dean of the faculty of medicine, Jawad Abu Hatab, said confronting a pandemic in a country already battered by nearly a decade of war was no small feat.

“Coronavirus is a challenge for all health sectors even in stable countries,” said the doctor and former head of the opposition “Syrian Interim Government”.

“So imagine a region like ours where the medical sector has been destroyed and healthcare centres set up instead are not enough.”

The World Health Organization has recorded 337 attacks on healthcare facilities in northwestern Syria between 2016 and 2019.

By March, it said only half of 550 health facilities in the region remained open due to damage, insecurity or people having fled the surrounding area.

Over the past months, humanitarian actors have scrambled to help increase testing capacities and the number of beds ready to receive patients suffering from Covid-19.

At the Azaz-based university, some more 1,000 undergraduate medical and pharmacy students are hoping to play their part.

Mohammed Shaashaa, who is studying to be a doctor, is one of them.

“Since 2011, medical staff has dwindled because of doctors emigrating, being detained, or even some having been killed,” said the 26-year-old.

“We signed up to study medicine to serve our people,” he said.