Prosecutions in European courts against individuals who have committed war crimes is giving hope to refugees that justice might be served and their file could be reviewed writes Enab Baladi. 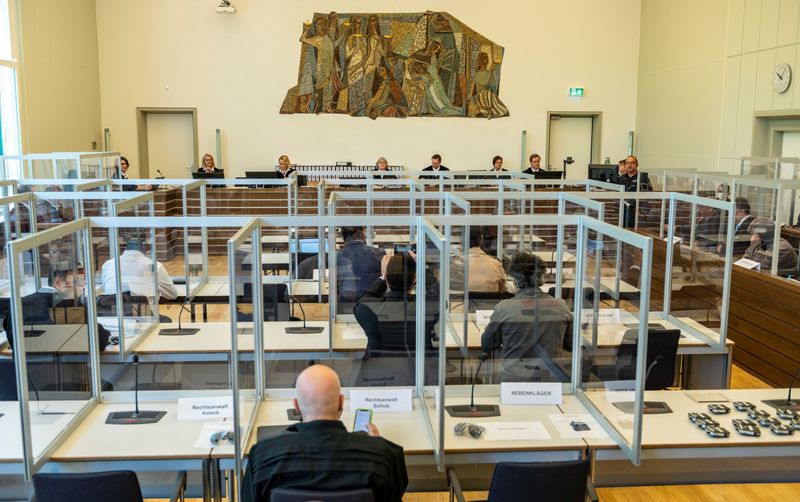 The prosecutions and investigations carried out by the units specialized in monitoring war crimes in European human rights organizations are considered an opportunity to provide an integrated legal frameworks to regulate asylum policies within the European continent. Those prosecutions and investigations contribute to highlighting, judicially and in the media, the violations being committed in Syria, and have the stakeholders in Europe develop and implement asylum policies, informed by the scene in Syria, based on legal presumptions.

The Koblenz trial in Germany, whose sessions started in April, is considered a legal backing for the Syrian refugees in Germany against any decision to return them to Syria, according to what Syrian human rights defender Mansour al-Omari told Enab Baladi.

The makers and implementers of asylum policies in Europe rely on several sources to assess the situation in Syria, including reports by the United Nations, human rights organizations, and intelligence reports, according to Omari, and the Koblenz trial will not be decisive enough to protect refugees from the risk of deportation. However, it will also constitute a resource for asylum law and policy makers.

Due to the large numbers of Syrian asylum seekers and refugees in Europe, victims and witnesses who were not available to testify in court before, as well as some physical evidence and even some suspects, have now become accessible to the German and Swedish authorities, according to a 2017 Human Rights Watch report. Germany and Sweden are the most stable host countries for Syrian asylum seekers in Europe, and were the first two countries in which individuals were tried and convicted for serious international crimes in Syria.

German courts tackled the issue that the authorities in several European countries should review the files of Syrian refugees again, according to the Director of Syrians for Truth and Justice organization, Bassam Alahmad, as it is possible that prosecution could be making a difference in this regard. Alahmad called on refugees to report those implicated.

The Ministry of Immigration and Integration in Denmark is working at expediting the immigration process for Syrians, so that the council can assess as soon as possible whether residence permits should be revoked for refugees in Denmark.

Tesfaye pointed out that about 100,000 refugees have returned to Syria from the surrounding areas, and considered that Syrians in Europe should return if circumstances allow.

The representative of the Free Lawyers Syndicate in Europe, lawyer Ibrahim Melki, called on the Syrian refugees to file lawsuits against those suspected of having committed “war crimes” in Syria.

Melki said to Enab Baladi that he and a group of lawyers “are working to bring many of those involved in war crimes to trial in Europe.”

Five European countries welcome the Syrians’ requests to bring cases before their courts even if the perpetrator does not reside in the country, according to Melki. Those countries are Germany, Sweden, Spain, the Netherlands, and Norway.

Trials as a reassuring step for asylum seekers in Europe

The trials in Europe that probe into the crimes committed in Syria are an important factor in reassuring refugee victims and their families. Through the cases brought before European courts, evidence has emerged that some suspects of human rights violations in Syria hid among the real asylum seekers.

The vast majority of asylum seekers, who have arrived in Europe from conflict zones over the past few years, are looking through legitimate means for protection from persecution, crime, and violence, according to a report by Amnesty International.

The trials contributed to scrutinizing asylum seekers to identify individuals suspected of committing war crimes. Interrogating asylum seekers is an appropriate and necessary measure to ensure justice is served for the crimes committed in Syria.

Europe does not seek to send out a single message through the trials, a message that it does not accept, for the time being, normalization with the Syrian regime. The European Union, which is concerned with the issue of refugees on its soil, is sending other messages to various parties, as well.

With the increase of xenophobia by the far-right, which uses the issue to put pressure on European governments, the latter seek to send a message to their own people and refugees alike.

European governments reassure their people that they are trying, through trials, to investigate and unveil the truth about immigrants, and hold those who have committed crimes and violations accountable. This goes to show that the government takes measures to protect its citizens, which is a real win for European governments.

The second message Europe is sending, is for immigrants, that “if you have committed a crime in the past, you will be held accountable.”