Everyone clings to the talks for strategic, tactical, or personal considerations, Asharq al-Awsat says 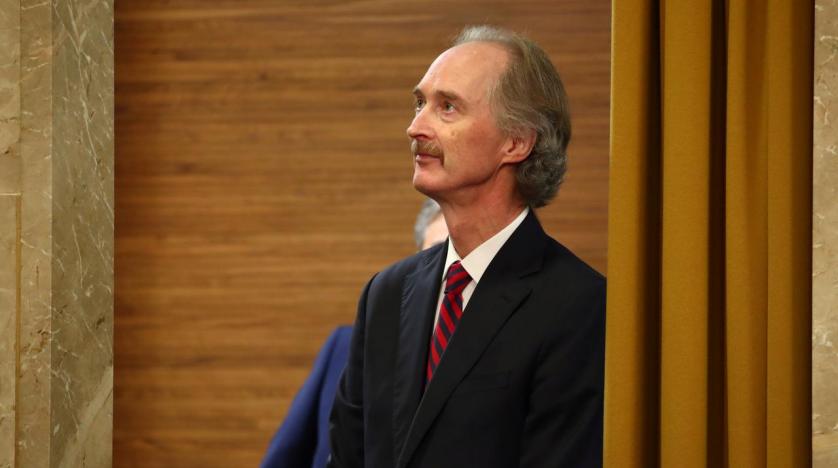 The last round of meetings of the Syrian Constitutional Committee in Geneva last week saw a new formal approach that almost tackled the content of the new constitution.

The recent round – the third since the formation of the committee last October – was marked by the presence of the government’s delegation to Geneva and the relinquishment of its previous demand that the opposition endorses the “national pillars” before any constitution talks.

Those pillars included the “rejection of Turkish aggression, adherence to the unity of the Syrian territories and sovereignty and the denouncement of separatist projects and terrorism.”

However, the delegation headed by Representative Ahmad Al-Kuzbari proposed a new approach, which is based on the agreement over the “national identity” and its determinants before entering into the discussions over the new constitution.

This “formal achievement” can be attributed to the Russian intervention as the Special Envoy to Syria, Alexander Lavrentiev visited Damascus and met with President Bashar al-Assad to secure a “positive attitude” from the government at the Geneva meetings.

What’s also new is that the committee’s meetings were held in the presence of a Russian advisor in the conference room at the United Nations headquarters.

The advisor was taking notes and conversing with participants from all sides, without trying to introduce certain proposals. Nonetheless, the presence of the Russian representative would facilitate an accurate reading of the developments during the meeting between Foreign Minister Sergey Lavrov and UN Envoy Geir Pedersen in Moscow.

During the talks, the delegation was keen to repeatedly stress that it “is not a government delegation, but rather is supported by the government.” Sometimes it called itself the “national delegation” and referred to the other side as “the Turkish delegation.”

Moreover, the delegation also refused the issuance of a joint document at the end of the three-day round, stressing the need to agree first on the “national determinants.”

When the opposition group, headed by Hadi Al-Bahra, said that national determinants were included in the closing statement of the National Dialogue Conference in Sochi at the beginning of 2018, the response was that the outputs of the Sochi meetings were not binding on the delegation supported by the Syrian government.

Therefore, it can be said that the sessions were similar to the “cultural forums” that were held years ago in Damascus.

The last round of talks did not bring about a cumulative political action between the delegations representing the government, the opposition, and civil society. They also failed to make the conflicting parties and the civil society delegation adopt Pedersen’s proposal to hold the next talks on October 5. The meeting ended without agreeing on any agenda for the next round.

The problem is that Damascus refuses to receive Pedersen because it says that the committee “is a sovereign entity whose work should not be interfered with.” Hence, there was no choice but for the UN mediator to knock on the door of Moscow and Ankara to ensure the continuation of the work. However, the guarantors say that the constitutional process should be led by Syria.

Despite spinning in this vicious circle, everyone clings to the talks for strategic, tactical, or personal considerations: Damascus reluctantly agreed to participate in an UN-sponsored process in Geneva and cannot tell Moscow that there is no political process. This process also constitutes a mean for Ankara to deprive its Kurdish opponents of the “international legitimacy” while continuing to maximize the extension of its influence in northern Syria. In a certain way, this also applies to Iran.

As for the Syrian opposition, it is adhering to the only platform that gives it a weight similar to that of the government, despite the great difference in reality and the size of external support. Whoever dares to take off this card will be responsible for looking for an alternative!