Fares al-Shihabi, who recently appeared on a TV channel owned by Samer Foz, is well known for his inflammatory and hostile statements about the Syrian people writes Brocar Press. 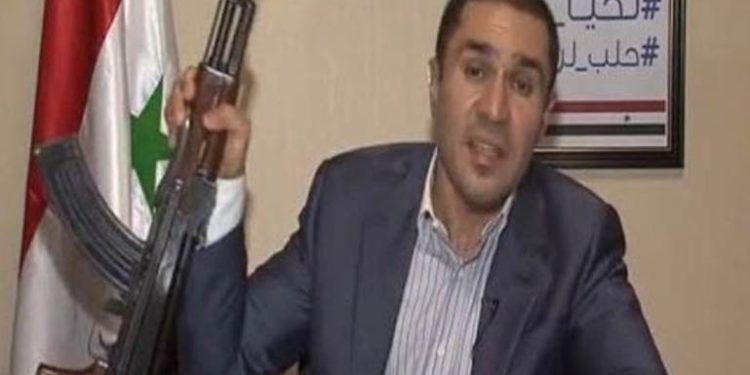 Fares al-Shihabi, a member of parliament and head of the Syrian regime’s Aleppo Chamber of Industry, sparked indignation among Syrians again after he appeared in an episode of the TV program Hikayati (“My Story”), which airs on the the Lina (“For Us”) TV channel, owned by one of the regime’s main economic backers, Samer Foz.

Shihabi is known for his racist and hostile comments and statements against the Syrian people and their aspirations. He has incited the killing of civilians in opposition areas by the Syrian regime in open statements on social media, the latest of which described the city of Kafr Zeita as a “settlement,” and the cities and towns of Idleb as “garbage housing.” He also provoked anger and criticism by calling more than once for the extermination of entire cities under the pretext of fighting “terrorism.”

The Lebanese TV presenter Rabia al-Ziyyat spent about an hour discussing a figure she called patriotic and popularly loved, who had stood against “terrorism.” She also discussed his accomplishments and sacrifices, contradicting what Syrians know about Shihabi and his positions over the years of the revolution. During the interview, she moved around the districts and positions in Aleppo city destroyed by the Syrian regime.

During the episode, Shihabi attacked businesspeople who had come to prominence over the last few years, describing them as “war profiteers,” blind to the problems around Samer Foz, who over just a few years, transformed himself into a giant of the Syrian economy. Will this episode be a prelude to Shihabi being won into Foz’s ranks in the race for economic domination and influence in Syria and in the alliances emerging in the margins?

How do Syrians see him?

Abdel Kareem al-Halabi, who is from Aleppo and was displaced by the regime forces’ siege of the city and the war of extermination there, told Brocar Press that Shihabi had been one of the most well-known figures among Aleppo residents for inciting the extermination of the people from eastern Aleppo’s districts, as well as for the mobilization campaigns he directed with loyalists against residents of opposition areas, moving them with racist and regionalist rhetoric and inciting them not to give them any help, even after they left the city.

He said that the loyalist militias that enjoy support from Shihabi are still deployed in Aleppo and continue to harass the residents, and that they have also been involved in killing a large number of the city’s residents because of their peaceful activities during the Syrian revolution, and that they have also played a role in the disappearance of the city’s young men into prisons.

Adi al-Mastouf, a media activist from Kafr Zeita in the Hama countryside, asked how a figure hostile to the Syrian people could be a member of parliament except in a country run by a dictatorial gang.

He told Brocar Press that his attack on the city and other rebellious cities was normal for racist regime figures who have tried to highlight immorality to satisfy this system and its intelligence agencies, as well as to get more loyalty and distinction, especially given that Kafr Zeita had been one of the first cities in the Hama countryside to rise up, and had withstood the regime for nine years, which had angered these figures and now they took pleasure in the killing of its residents and destruction of its districts.

He said that the most noteworthy had been the call to remove the “settlement” of Kafr Zeita, which was a Syrian city, populated and full of life, before being destroyed by the regime. Mastouf called for them to remove Iranian and foreign militia settlements that surround the city of Aleppo, as well as from other Syrian cities, if they are truly “patriotic” figures, as pro-regime media claims, most recently Lina.

Ahmed al-Akleh, an activist from southern Idleb, said that, “Shihabi’s latest comments were racist and regionalist, feeding into the ‘shariah’ position, which reflects the view of prominent regime figures about areas that revolted against the regime. The matter is not surprising, as he has openly used insulting language many times against Syrians and Syrian cities, and is known for his hostile position, which even some loyalists have criticized.”