A solution to the conflict between Bashar al-Assad and Rami Makhlouf has started to form, after the later was reportedly placed under house arrest reports Al-Araby Al-Jadeed. 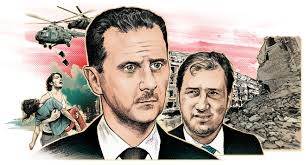 Sources from the Syrian capital Damascus have revealed that a solution to the dispute between the regime President Bashar al-Assad and businessmen including Rami Makhlouf is on the horizon after religious figures and regional powers intervened. They said that the solution would be via Mohammad bin Salman, the Saudi crown prince, with commanders and businessmen accused of corruption.

The sources told Al-Araby Al-Jadeed that assurances of a solution by the regime had reached the businessman Mohamed Hamshou, who left Syria a few days ago and is currently in Beirut with his father under the pretext of receiving treatment.

Regarding the dispute between Assad and Makhlouf, the sources add that “the matter is almost over,” after the confiscation of the Bustan Association, which was established by Makhlouf in Lattakia in 1999 with the aim of offering health services to those in need, and then at the outbreak of the revolution was turned—especially its military wing—into a strike force led by Samer Darwish for businessmen.

The Bustan Association had been transferred to the Syrian Trust for Development, which is managed by Asmaa al-Assad, Bashar al-Assad’s wife.

Today, according to the sources, there is a decision to collect funds that may amount to about two billion, which “Hamshou is currently paying 150 million dollars of” to intervene in the foreign currency market to improve the price of the Syria pound, which has recently collapsed, and support some storehouses and secure fuel for the winter.

The Damascus sources said that major funds had been collected by those they described as “crisis traders” whose wealth had increased, as well as the salaries paid by Samer Darwish to the “shabiha,” with Russia in charge of their fates.

The sources told Al-Araby Al-Jadeed that patrols by the presidential palace have raided Bustan Association offices in Lattakia, Damascus and in buildings in Tartous and have confiscated electronic equipment and association files and documents.

They added that the dispute has grown inside the family and between Bashar al-Assad and businessmen and that it is now being resolved at international request, but it will not be extinguished and it is expected that Bashar al-Assad may use up every possible alternative, even his brother Maher, as an alternative to prosecuting Mohamed Hamshou despite him being Maher’s arm and manager of his finances.

The sources said that the dissolution of the Bustan Association was a “Russian demand” and that Rami Makhlouf being among those prosecuted was to improve Assad’s image and an attempt to make Syrians think that no one was above the law. Other sources said that “Rami Makhlouf’s financial power and his possession of a military force had started to worry Assad.”

But the sources concurred that there was a “new role” for Asmaa al-Assad and her taking over tasks they described as “high level” with regards to companies, financial matters and some presidential palace affairs.