The Syrian Democratic Forces have been arresting activists in Raqqa, accusing them of being members of the Islamic State writes Baladi News. 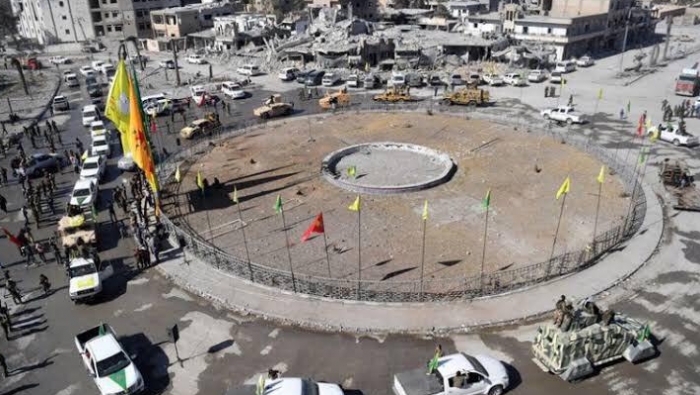 The Syrian Democratic Forces (SDF) have continued a policy of restricting freedoms and attempting to silence Raqqa’s voices by arresting activists who have taken part in the revolutionary mobilization since the start of the revolution in Raqqa province and transferred them to an unknown location, in a new phenomenon that started last week.

On Aug 12, 2019, SDF patrols raided the al-Beit al-Yunani restaurant-cafeteria south of the city of Raqqa and arrested a young man, Salah al-Kateh and three of his friends after beating them in front of a number of civilians. They were then placed inside a military vehicle and taken to an unknown location. Those who were arrested were activists working in civil society organizations.

After their families inquired about them, the SDF claimed that they were investigating administrative corruption in the organizations where they worked.

Days after the SDF arrested them, they went on to arrests doctor Hassan Qassab in the city of Tabqa after raiding his home without prior warning and attacking him and his wife, beating and insulting them, and then took some of the contents of his home and confiscated their mobiles and sent them to a base in the city. They had only been married two days.

Qassab worked in the al-Furat program, backed by the US State Department, and had returned to Raqqa two weeks earlier with the intention of getting married, and then was arrested.

Hours after Qassab’s arrest, SDF military patrols raided the office of the Inmaa organization in the al-Karameh district of the eastern Raqqa countryside and arrested its director, Ahmed Hashloum, and transferred him to an unknown location.

The SDF did not stop at just arresting people, but claimed in some media outlets that the civilians activists belonged to the Islamic State (ISIS) in Raqqa province and said that Qassab had been a major ISIS leader in the area and that Hashloum had been a major commander in Raqqa.

Local sources told Baladi News that the SDF claims had no basis and that it was well known that Qassab had left Raqqa when ISIS took over the city and had been wanted by the jihadi group.

Ibrahim G., a resident of Raqqa, who works for a medical organization, said that the SDF wanted to get rid of revolutionaries and figures who had taken part in the mobilization against the Assad regime in the areas under their control. It will then run the organizations themselves and hand them over to loyalists in order to continue the corruption of SDF committees and institutions in Raqqa province.

Firas Hannoush, a prominent resident of Raqqa city and a member of the campaign “Raqqa is Being Silently Slaughtered” said that the arrest of the civil society activists in Raqqa by the SDF and the attempt to charge them with being members of ISIS and corruption, which aim to prevent people from being in solidarity with them, which was a way of using ISIS to distort the reputations of people.