Aleppo's ancient souk, which previously hosted over 50 stores, was severely damaged during the fighting in 2015 writes Asharq al-Awsat. 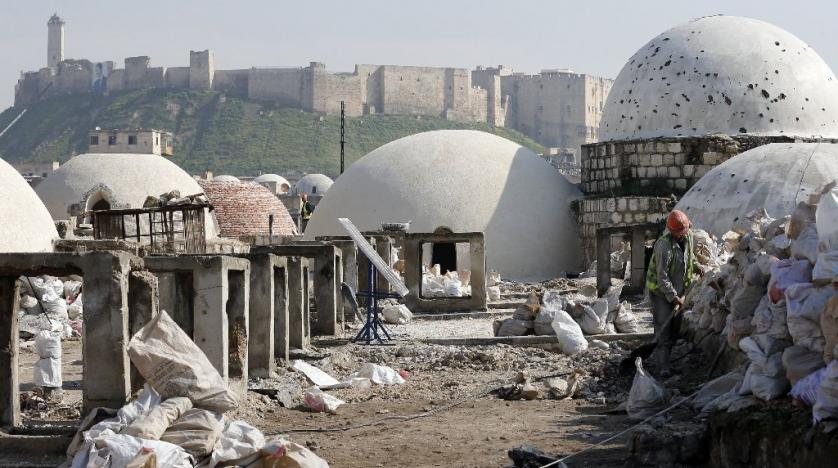 On the domed roof of a historical market in the northern Syrian city of Aleppo, architect Bassel Daher moves between workers painstakingly working to erase the scars of war.

Men wearing vests and helmets repair parts of the roof still bearing visible traces of the four-year-long battle for the former rebel stronghold.

They cover its charred surface with a fresh coat of white paint as part of a wider effort to rehabilitate the Saqatiya market, or souk in Arabic.

Located in the old quarters of Syria’s second city, the market dates back to the Ottoman period.

“I feel like I’m redrawing history by restoring this souk,” says Daher, 42, one of six architects overseeing its revival as the country’s conflict marks its eighth year next week.

“For me, it’s the project of a lifetime.”

The Saqatiya souk covers an area of more than 1,500 square meters (16,000 square feet) and used to house more than 50 shops before Syria’s conflict landed in Aleppo in 2012.

It is located near other landmarks of Aleppo’s Old City, a UNESCO-listed World Heritage Site that served as a frontline during clashes that ended in 2016.

Russia-backed regime forces that year retook control of the eastern side of the city, much of which remains in ruins.

The celebrated citadel, a jewel of medieval architecture whose surrounding wall was damaged by a blast in July 2015, is visible from the market’s roof.

The Umayyad mosque, an ancient site that dates back to the 11th century, is within walking distance.

Clashes in April 2013 reduced the mosque’s minaret to an unrecognizable pile of blocks.

UNESCO estimates that as much as 60 percent of the Old City was severely damaged.

Saqatiya market fared better than most, with 30 percent battered during the fighting, says Daher.

It shows signs of major damage but no sign of collapse, Syria’s antiquities authority said in a report last month.

Restoration works began on November 1 after Syrian authorities signed a partnership agreement with the Aga Khan Foundation in Syria.

Renovations are expected to be completed in July, according to Daher.

Workers are focusing on erasing all “signs of war” from the market and correct old construction violations.

“The broader aim is to bring merchants back to their shops,” he says.

Saqatiya market is one of around 37 souks surrounding the Aleppo citadel, the oldest of their kind in the world.

They stretch from the western part of the Old City to the gates of the citadel in the east, covering an area of around 160,000 square meters.

For centuries, they were the commercial heart of the ancient city and served as a key trading hub between the East and the West, says Alaa al-Sayyed, a historian and specialist on the Old City.

The expert, who is also overseeing the restoration, says “they are more than 2,000 years old”.

“They are the longest and oldest covered markets in the world,” he says.

They consist of dozens of shops, schools, mosques, and bathhouses.

In their long history, this is not the first time the markets have had to be restored.

Over two millennia, they have weathered numerous earthquakes and conquests, but “every time they were rebuilt”, he says.

Diyaa al-Issa, 38, wears a white helmet and uniform as he works on renovating a massive gate in the market.

He is one of around 60 men involved in restoration works.

Before the conflict, Issa used to work in renovation and maintenance of the city’s ancient heritage.

“Renovations today are nothing like those we used to carry out in the past,” he says.

“We used to restore stones affected by moisture, wind and time,” he says.

Issa hopes the souk can be restored in a way that does not alter its historical character or dispense with too many of the original materials.

His colleague, Mohammed Baqiya, 47, is looking forward to the market coming back to life.

“The stone will be restored,” he says.

But “what is most important is the return of shop owners and people who used to bring life to the souk”, he says.

“It does not matter how beautiful the souk will be,” he says. It will mean nothing “if it is empty of people”.