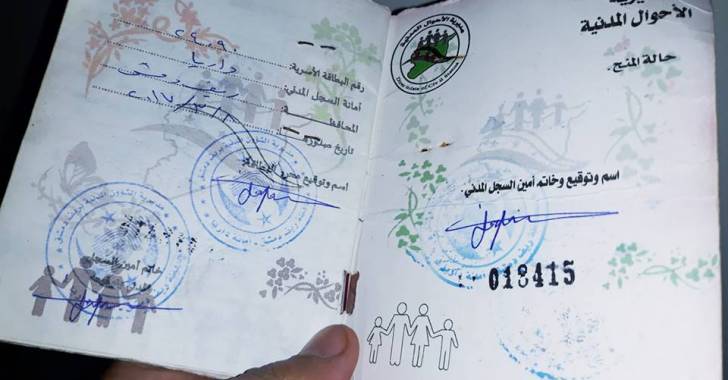 Obtaining paperwork to prove an individuals identity is a major problem for residents of liberated northern Syria. The securing of family record books and others personal papers, has led to some being blackmailed by lawyers, given the opportunity for them to profit, as they pay large amounts of money going from one lawyer to another, according to residents of the last area under opposition control.

The regime imposes extremely difficult conditions to obtain these papers, including requiring that the person be present in their region in order to obtain a personal identification papers or a passport, and for one of the two spouses to be present if a marriage is to be registered or to obtain a family record book.

Revolutionary agencies in the north, especially those under the authority of the Interim Government, have tried to find an alternative way of granting residents family record books or passports from their government, but this has not received great interest because these papers are not recognized by anyone except with the northern Syrian institutions.

“The prices differ horribly,” said Mahmoud, a displaced person from the Damascus countryside living in Idleb city. Mahmoud obtained a family record book from the Interim Government through one of the committees responsible for displaced people, but he needs to establish his marriage in Damascus—and this led him through a number of lawyers. “One of them asked for 350,000 Syrian pounds to register the marriage and to get the family record book, while another asked for 200,000 pounds.”

Mahmoud was able to register the marriage, but the issue of personal ID and the family record book left him angry, as “none of the lawyers I contacted could help me.”

The lawyers “twist and turn”, as Abou Saeed—a resident of the Idleb countryside put it. Abou Saeed needed an official family book, and one of the lawyers asked for a thousand dollars to obtain the document. Abu Seed told Iqtissad: “I don’t think about it anymore. One thousand dollars is too much.”

With regard to passports, the price of obtaining them can be very high if the individual is not personally present in Damascus. Women who are outside regime-controlled areas, can obtain a passport for 700 to 900 dollars, while obtaining a passport for men—especially those of military service age—is close to impossible, if they are in the liberated areas.

The civil registry document is is considered very easy, although the price of obtaining one is still 20,000 pound for those in Idleb. A baccalaureate or university degree costs between 50,000 to 75,000 pounds.

Residents who do not have personal IDs have resorted to forged IDs which resemble the IDs issued by the regime and the cost of which ranges between 2,000 and 5,000 pounds per ID.

In the northern Aleppo countryside, which is overseen by Turkey, residents obtain special IDs issued by the local councils that administer the area, whereby they are seeking to ban official personal IDs to put the new IDs in their place.