Jaish al-Islam, which is seeking a new role after its demise from eastern Ghouta, may contribute to Turkey's potential onslaught on the Kurds east of the Euphrates, a pro-regime outlet is saying 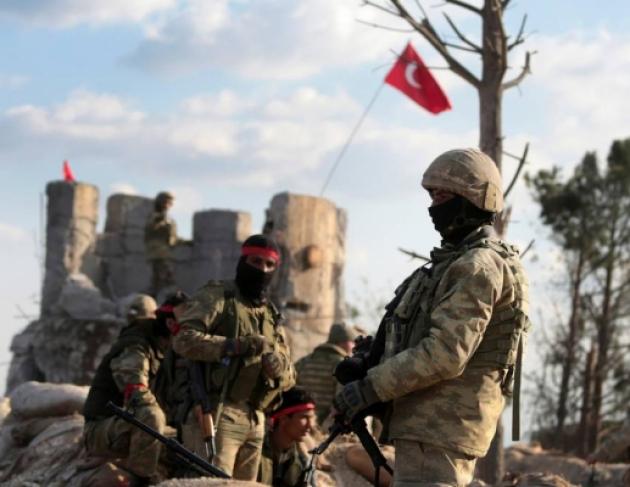 It appears that Turkey is preparing to exploit the Jaish al-Islam (Army of Islam), previously one of the biggest armed militias in the Eastern Ghouta, and use it to achieve aims serving its interests through fighting the Kurds in areas under their control — especially after the Saudi support given to it had stopped.

On social media at the end of May, a picture was published of the leader of Jaish al-Islam and the commander of Faylaq al-Rahman together during a meeting in the headquarters of Liwa al-Mutasim in northern Syria, where they reconciled and agreed to end the fighting between them, at the request of the Turkish government.

Media activist Omar al-Doumi said: “Jaish al-Islam has tried to penetrate the city of al-Bab, and to show itself more — a simple example of that is it overseeing the sports championship in the city. But the other rebel groups could not accept it imposing its influence, especially given that they sacrificed many fighters to liberate it from the ISIS organization, and they did not reach it easily.”

Doumi continued: “A new policy is being pursued by Jaish al-Islam in the city of al-Bab, whereby it has recently deployed a number of stores, which are distinguished by selling at below-market prices, which some describe as a loss — and the aim of these is not to make a profit, especially given the demand among many people to buy from them since they are cheaper than other stores in the area.”

Doumi also predicted that, “The warming relations between Jaish al-Islam and Turkey did not come out of nowhere, especially with the Turkish defense minister saying a few days ago that they needed to purge the eastern Euphrates after purging Manbij of the PKK. Turkey is calling on the support of Jaish al-Islam in its fighting.”

Media activist Anas al-Shami said: “Jaish al-Islam’s relations have grown closer with Turkey since it was expelled from the Ghouta and it was cut off from Saudi aid, which has forced it to give up its previous positions toward it, which did not accord with its pure Salafist position, in exchange for support.”

Abu Ahmed Taameh, who left Douma for northern Syria and is an opponent of Jaish al-Islam, stressed that: “Jaish al-Islam’s popularity has collapsed among residents, especially given that it opened up a battle against other rebel groups busy fighting the Syrian army, which led to the Syrian army taking the area, one city after another.” He added that: “Our problem with Jaish al-Islam lies in its leadership, from which we have not seen any wise decision since it took command. Everyone saw the video recently distributed of its leader visiting tourist sites in Turkey, indifferent to the tragedy of the camp dwellers who had begun to suffer with the coming of winter.”