As the government start to assault northern Syria, the Free Syrian Police are staying at their posts writes Al-Araby al-Jadeed. 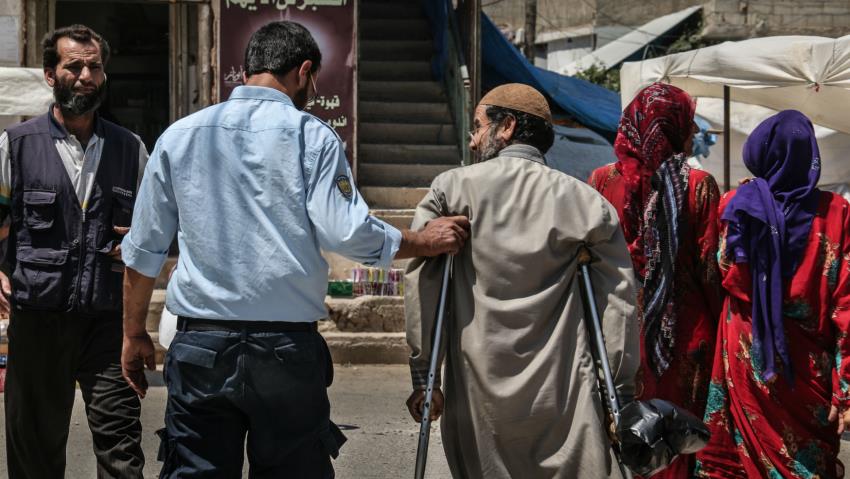 As Syrian regime forces mobilize for a new offensive on Idlib, a group of men and women continue to maintain safety and security in the opposition-held province, amid an atmosphere of panic, dread and terror.

The Free Syrian Police (FSP) have been key to the establishment of law and order in Syria's north over the past six years, preventing outbreaks of looting and lawlessness in opposition territories.

Their pursuit of thieves, as well as their work with the White Helmets, or more ordinary tasks such as directing traffic, have seen their roles as officers transformed since they defected from the regime.

The trust the unarmed officers have earned from the community and ability to maintain order, without brutality, has made them among the most popular institutions operating in opposition areas.

Their ability to halt the spread of extremist groups – such as Tahrir al-Sham (HTS) – has also seen the Free Syrian Police become one of the Syrian opposition's great success stories.

Many predict the whole revolutionary enterprise appears doomed with the police hit by US and UK funding cuts and soon to face the full wrath of the regime.

When the bombs rain down, the officers expect to be among the first targets of Russian missiles, as has happened during other recent regime offensives on opposition areas.

Operating since 2012, the police commanders told The New Arab that they – and their officers – will continue their work amid the bombing.

Plans have been made to help civilians access air raid shelters, aid in rescue operations, and clear roads for refugees uprooted from regime bombing.

"There have been constant attacks and air raids [on FSP facilities] from the regime. Our headquarters, our centres, and all the FSP facilities have all been regularly targeted," said Brigadier Adeeb Sharraf, the founder of the FSP.

The FSP command has given orders for officers to be on call 24/7, when Assad orders the assault on the people of Idlib.

Their training and experience gained during the revolution will be put to the test, but Brigadier Adeeb is confident the officers will fulfill their duties.

"The police's role is to help the medical teams and civil defence provide aid and save the people. There is a big fear that a mass offensive could lead to tens of thousands of casualties in the north," he added.

If the regime takes Idlib, then officers will also have to think of their own safety.

Along with the White Helmets, the police will likely be among the regime's most wanted, for daring to defy the brutal government and for their ability to run state-level institutions outside Assad's command.

"The liberated areas have shown there is no need for the regime [to provide security], so this is why they have targeting the FSP more than [rebel] fighters," he added.

Colonel Ali Alzzain helps operate the FSP in Idlib, and was one of the first commanders to defect from the regime to the new opposition police force.

"The Syrian regime has always hated the revolutionary institutions, and the FSP are among the largest. We don't know what the fate will be for the officers if the regime takes Idlib, but we expect it to be torture and death," said Colonel Ali.

"When the regime took Daraa this summer, the first thing they did was to photograph officers outside FSP centers."

The message was clear. Not only did such tactics serve in intimidating supporters of the revolution, but also signify to the Syrians that the security of the FSP was over, and the brutality and murder of Assad had returned.