Four million Syrians are unable to secure their nutritional needs. A WFP report also indicates a 40 percent decline in wheat production from 4.5 million tons in 2012 to 2.4 million tons this year 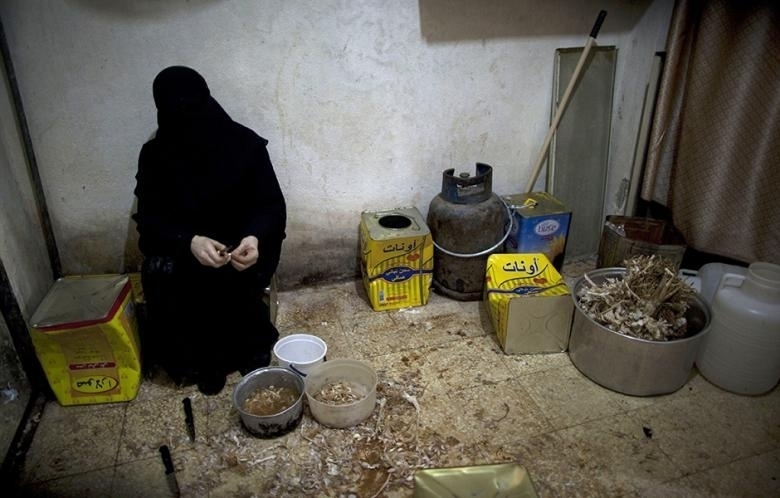 There is no facet of the Syrian economy that the crisis has left untouched. Wages are at new lows, prices of basic goods have skyrocketed, and the black market has put new pressures on regular citizens.

In the first few months of the crisis in Syria, the country’s median wage was around 12,000 Syrian pounds, around $255 at the official exchange rates at the time. The minimum wage was SYP 9,975 ($212) The average rate of consumption for Syrian families, based on estimates in some districts according to the Central Administration of Statistics, ranged between SYP 31,500 ($670) and SYP 42,000 ($890). Even then, questions were being raised about citizens' ability to secure their most basic needs.

This could be a prologue to a social and humanitarian collapse. Syrian families are becoming unable to cover the cost of their basic daily needs due to the leaping prices and inflation rates. Syrians are now threatened in their dignity and life.

Commenting on the issue, head of the Consumer Protection Society Adnan Dakhakhni explained that a family of five would need around SYP 30,000 ($286) to secure its nutritional needs every month. However, a second-tier state salary does not exceed SYP 27,000 ($257). This means that a family of more than five or those making under SYP 30,000 will not be able to secure their nutritional needs, according to Dakhakhni.

In the same context, the UN World Food Program (WFP) published a recent report, saying that 4 million Syrians are unable to secure their nutritional needs. The report also indicated a 40 percent decline in wheat production from 4.5 million tons in 2012 to 2.4 million tons this year.

The social crisis is deepening as a result of the destruction of production facilities and services. The undiscriminating war is leading to a halt in the production cycle, with exports dropping by 97 percent, leading to a lack of hard currency in the market.

Oil production dropped to less than 20,000 barrels a day. Many wells have been destroyed or placed under the control of non-state parties who sell its products illegally. Losses in the petroleum sector are estimated at $4 billion.

Today, however, poverty rates have exceeded all expectations, reaching 80 percent of the population. Revenues from tourism stopped completely, once bringing in around $8 billion every year. Losses incurred by the public sector during the crisis are estimated by Deputy Prime Minister for Services Omar Ghalawanji at around $7.5 billion. Similarly, the Industry Minister Adnan al-Sikhne estimated the direct and indirect losses of the industrial sector at SYP 60 billion ($570 million), at the end of the first half of 2013.

In addition to the above, there is the negative impact of the drop in foreign currency reserves in the Central Bank. Before the crisis, the foreign currency level was estimated between $18 billion and $20 billion. According to more recent reports, it is now estimated at just $9 billion.

The foreign currency crisis is multiplied by international economic sanctions against Syria; decelerating industrial, agricultural, and oil production; the halt in tourism revenues; and the decrease in the volume of foreign currency remittances by expats. This is in addition to widespread speculation and financial trading by merchants, businessmen, and money exchange desks.

The speculators did not merely smuggle their hard currency reserves outside the country – the amount smuggled to Lebanon alone is estimated at $11 billion – they are also playing the role of broker between the Central Bank and importers. This is a big mistake in the current situation.

Since the only commodity exchanged by these companies is foreign currency, in addition to the Syrian pound, and their only mission is to finance monetary transactions, it is only natural that they will begin speculating on the Syrian currency, instead of funding the country's import needs.

Therefore, currency exchange companies should no longer be allowed to finance commercial operations, which should be given to legitimate banks. An exchange fee should also be added to foreign currency purchase operations for non-commercial purposes and on foreign exchange. This would lead to the rationalization of the use of foreign currencies and its use, in addition to restricting the movement of capital and foreign currency notes.

The Central Bank’s financial and monetary policies should be linked to overall state policies to temporarily limit the bank’s autonomy and impose state supervision of its work.

Tax Policy and the Collapse of the Moral Order

Deterioration in living conditions for most Syrian families is the result of more direct and indirect taxes. Tax policies are becoming biased toward investors and merchants who control people's lives. This leads to deepening poverty and sharpening social divisions. Despite the policy of tax exemption and lowering taxes on investors and the movement of capital, this did not lead to a reduction in tax evasion.

These transformations go hand in hand with the beginnings of social decay due to citizens' inability to cope positively in the new situation. The current crisis and the decline of the impact of morals and social values, added to the decline in the legal powers of authorities, could lead to a total social collapse.

This article is an edited translation from the Arabic Edition