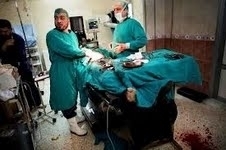 In the past two years, we’ve gotten used to hearing the phrase "field hospital" repeated in every TV newscast or article talking about Syria. Recently, the famous American TV series “Grey's Anatomy” featured a scene about the horrible medical situation in Syrian field hospitals. We see two middle-aged Syrian doctors along with the series’ original actors and a cadaver on a bed. The scene simulates a crash course similar to a situation that Syrian doctors might face in a field hospital with minimum supplies available. The Syrian doctors, looking at the available supplies, explain that if it’s supposed to be a genuine training, half of what’s on the tray should be removed, the lights should be turned off, and, keeping only a very small flash light on, they say, “Now we can go.” This leaves the American doctors in deep shock. The scene gives us a small peek into what it is like to work in an undercover, illicit hospital in Syria.

When the demonstrations started in Dara'a and the first victims of the Syrian revolution were shot down in main streets and squares, the Syrian authorities started arresting the wounded in hospitals and medical centers, driving them to be interrogated in detention facilities, and also shutting down and shelling hospitals. It became necessary to find an alternative so the authorities would not imprison the rebels admitted to legal hospitals.

In several houses, people gave up a room to turn it into a field hospital, but the numbers of people wounded and killed were accelerating and regime forces were closing in on them. It was then necessary to move on to larger and more secret places, and these small hospitals evolved and spread across Syria, from Dara'a to Homs, Hama, and other Syrian cities that caught the flames of revolution.

From a small room to a real hospital

The first real field hospital was established in the Qadam-Assali area in the Damascus suburbs, behind a building with a beautiful garden, underneath which hid one of the largest field hospitals in Syria.

A donated basement measuring 400 square meters with a primary ventilation system was magically transformed with the help of a secret network of Syrian activists into a place filled with hope for those who were wounded and on the run.

The network started building the field hospital in consultation with a doctor who previously worked in hot spots all over the world establishing the basic structures of such hospitals.  Initially, the work done at the hospital was limited to some stitching, but progressed to include minor surgeries, and eventually neared the capabilities of a complete hospital able to run professional medical procedures such as X-rays, dialysis, MRI, Echo and more complicated surgeries such as respiratory and heart surgeries.

With the availability of required medical skills and a network of secret emergency teams, the hospital served a large number of patients during the Syrian revolution. The patients came from all over Syria, first from the Damascene countryside, then from Daraa, Homs, and other cities.

Sadly, while the hospital was the first of its kind built, it was also the first to be discovered and burnt to the ground by regime forces. However, the work that helped start this hospital was a light of inspiration to many similar hospitals.

As if it was not there

While The Syrian Observer was trying to investigate the network that stands behind this enormous work, we were unable to find a real clue pointing to a single person that manages the project. We were, nonetheless, able to communicate with a large number of people who did not communicate directly among each other; they are a kind of dispersed and layered network that spreads all over the Syrian map. There is no single person who knows everyone, though, because after the Qadam-Assali hospital was discovered, they learned their lesson. The network has developed an early warning system that keeps them alert if the hospital were to be revealed. At one point they were able within a couple of hours to move a section of a complete hospital in Midan –including the patients and all the equipment—to a safe place, leaving no trace of what they had done.

With the help of a few donors and several organizations, such as Doctors Without Borders (MSF), that believed in those people, many hospitals were equipped.

No money was involved directly in the procedures. Rather, lists of needs were put out separately, the requirements were purchased then distributed through the network to the doctor who is responsible for seeing that each field hospital meets his needs. The donor or the agency provide what’s required, and the equipment or medical supplies move through multiple stages to reach the targeted hospital, relying upon delivery people who are generally activists on the ground. Such activists demonstrate their integrity through smaller jobs first, moving on from delivering blood bags to bigger jobs like delivering an MRI or X-ray machine.

From a field hospital to a building prosthetic plant

Even though the network has faced some bumps, it has earned a good reputation during these tough conditions in Syria. The Syrian Observer was lucky enough to witness the birth of a new project inside Syria bringing together donors and experts to build and equip the first prosthetic plant in one of the areas controlled by the opposition in the Damascus country side.

Courage, patience, trust, and confidentiality are the watch-words of this work that is building, piece by piece, a much-needed facility that will help many people. It was a magic moment watching people in Beirut talking to engineers and doctors inside and outside of Syria. People who never met but share a belief in a cause: the cause of saving a human being.