80 percent of children aged 8 to 10 had never been enrolled in school before, or that they had only studied intermittently 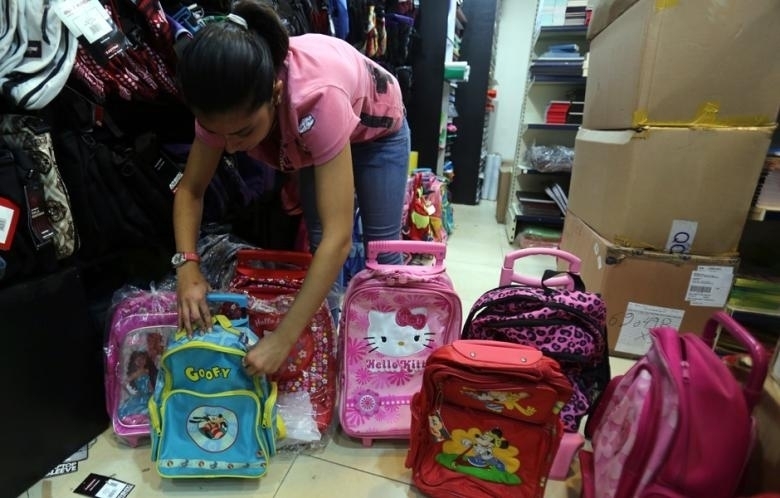 According to estimates of the Lebanese Ministry of Education, Syrian refugees of schooling age are not all enrolled in schools. Meanwhile, UNICEF approaches the issue of refugee students from the standpoint that every child, whether registered with the UN or not, has the right to learn.

In the outlying areas of Kfar Zabad, Lebanon, a few meters from the makeshift shelters that house Syrian refugees, children of different ages sit in four blue tents learning English. Reaching the tents requires walking over 200 meters along a rugged road.

There, we heard a teacher asking one of the young students, who was hiding behind a rock, why he was late to class. The kid answered, rather angrily, “I want to go back to my school in Aleppo. I don’t want to come to this class anymore.”

Ali Massoud, who is in charge of the camp’s teaching, explained the purpose of the classes to Al-Akhbar. He said, “Our aim is to prepare refugee students to adapt to the teaching curriculum in Lebanese schools, with a focus on foreign languages.” The teaching camp attracts around 250 students between the ages of 4 and 14, distributed into morning and afternoon shifts.

The Kfar Zabad teaching camp is one of several organized by UNICEF recently in cooperation with the Beyond Association as part of its implementation of an educational integration program for Syrian refugees ahead of the coming academic year.

Furthermore, he said, the ministry will not allow the Syrian curriculum to be taught, as this requires special laws and regulations. These makeshift schools will be replicated in Syrian refugee communities across Akkar to be supervised by teachers and children’s welfare workers. The schools will teach children languages and math in intensive sessions, in accordance with the Lebanese curriculum, with a view to allow Syrian refugee students to be integrated with Lebanese students by the start of the school year.

The program, according to emergency education expert Rania Abi Nader Zakhya, is part of UNICEF’s plan to provide learning opportunities to around 200,000 children aged 3 to 18. In response to a question about whether this was the number of students expected to enroll in Lebanese schools, she said, “This is the number we are targeting in our plan and budget. It is our estimate that 32 percent of the total number of refugees are school-aged children, which would be around 420,000 children.”

After conducting surveys, it was found that 80 percent of children aged 8 to 10 had never been enrolled in school before, or that they had only studied intermittently.

According to Zaghya, this explains the large number of school dropouts, and why providing school supplies is not enough to provide refugees an education. One thing that consoles her is finding 6-year-olds responding passionately to education.

UNICEF will seek to provide this kind of education to Syrian students through partners and NGOs working on the ground. UNICEF will also provide stationery and uniforms, but is still waiting to receive $35 million in funding.

As far as the Lebanese Ministry of Education is concerned, it does not take the assumptions of UN organizations regarding the number of Syrian students at face value. For the ministry, school-aged refugees will not necessarily all enroll in Lebanese schools. The final number will be determined during registration in public schools, according to the director general of the ministry, Fadi Yaraq.

What about those enrolling in private schools? The ministry cannot obtain figures on the number of those enrolled in private schools, whether free or paid, Yaraq said. Yaraq also maintained that public schools do not have a large capacity. While the figure was nearly 30,000 last year, it is going to be in the vicinity of 90,000 this year.

Furthermore, he said, the ministry will not allow the Syrian curriculum to be taught, as this requires special laws and regulations.

Concerning enrollment fees, Syrian students are treated just like Lebanese students and will be exempt from fees and provided with free books, but only as much as the budget allocations allow, Yaraq said.

Yaraq refused to disclose information about negotiations conducted by his ministry to secure these allocations, but Al-Akhbar learned that the ministry asked donor countries for $64 million to cover the needs of refugee students.