The photo shows "bisat al-reeh", a torture device found inside the State Security facility in Raqqa, Syria in late April 2013 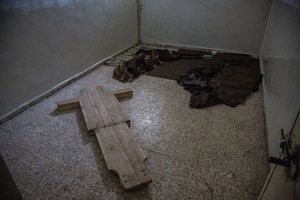 Of all the horrors and atrocities that I have documented during my practice of human rights law, the ‘Escape From Hell' tale remains among the stories I recall every day. With its five heroic protagonists and the monstrous character of Lt. Col. "Father Death," who supervised the torture and execution of the protagonists’ prison mates, it stands out even among the abundance of other violations with their own level of brutality, such as the latest wholesale murder of families in Eastern Ghouta by sarin gas.

Despite the harshness of the testimonies recounted to us by the five [escapees], meeting them triggered a sense of salvation [in me]. Seeing them alive, trying to explain what happened—which can only be classified as a miracle— they became a manifestation of the desire for life in the face of “Father Death,”which the Assad regime had represented for Syrians for decades, and most recently during the two and a half years of revolution.

Of all the torturers who abused the five detainees and the hundreds of others in the Harasta Air Force Intelligence complex, Lt. Col. "Father Death" was the one who symbolized the hell where 100,000 Syrian souls have been lost while attempting to escape. Lt. Col. Ma'an, who goes by the alias "Father Death," is Azrael personified. He wields absolute power, delivering death in its most egregious forms. "Father Death" stands as the antithesis of all that is humane, and has no relation whatsoever to the world of the living.

"Father Death" routinely picked out detainees that had been held for more than a year in the Harasta complex, and assigned them to the hard labor of digging trenches and building barricades for the regime's army. This went on until they broke down physically from the burden of hard labor and continued torture, at which point he executed them, but not before soldiers tortured them one last time for 'entertainment.'

This was all carried out within the confines of odd rituals, where "Father Death" would summon a detainee who had been selected for death, force him to kneel and kiss his hand, then wrap his hands around the detainee's throat for several minutes. It was as if the detainee was undergoing training for the death to come, while "Father Death" cemented himself as the authority over life as entrusted to him by the regime.

One survivor recalls in his testimony his first meeting with "Father Death": “A short and bearded officer named Lt. Col Ma'an, nicknamed "Father Death," appeared and asked us ‘How are you guys?’ We replied, ‘Fine, thanks to God.’ He told us, ‘I would love to introduce myself, I am Azrael – or why Azrael? I am God, and you will come with me to the house of righteousness, but as I am God I will grant you a few more days to live.’”

The five detainees managed to escape during Laylat al-Qadr in Ramadan last September, while working in hard labor near the intelligence complex. One of them told us, "No sensible person would attempt what we did; it was madness in the first degree, with guard posts surrounding us and bullets raining on us. But what we saw in detention made us lose our minds. Otherwise, we would not have attempted this insane escape."

Are these five former detainees not the same as all revolutionary Syrians who dared to rebel against "Father Death" two and a half years ago? No sane person would have attempted a rebellion against one of the most notoriously brutal regimes, and continued this rebellion against the apparent desire of the entire world, amidst objections to the support of the rebels, and the general disregard of the suffering of an entire people.

The world prefers to deal with Bashar al-Assad, the role model of “Father Death's” and the source of the authority that robs innocents of life. [The world prefers] prolonging Assad’s survival and turning a blind eye to the thousands of copies of Lt. Col. "Father Death" that have become well versed in the torturing and killing of Syrians for two and a half years. All the while,[the world] simultaneously seems astonished – its delicate feelings hurt – at the sight of groups linked to Al Qaeda strengthening their hold over liberated areas and openly practicing their execution performances.

Ahmed Hamada, LouayBallour,FawazBadran, Hassan Nasrallah, and MuwafaqJandaly managed to escape from the hell of Lt. Col. "Father Death." It was nothing short of a miracle. The men put logic aside and risked death, albeit one less severe than dying of thirst, with frail bodies ripped by torture and the bullets of Lt. Col. Ma'an. Whenever I feel despair I recall the story of these five survivors, hoping that perhaps we still have time to witness the miracle of our collective escape from the hell of "Father Death" one day soon.

Edited By: The Syrian Observer