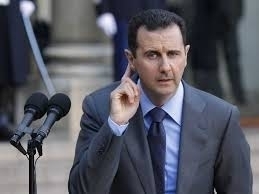 The Syrian regime is now trying to market itself as an internationally accepted party. And the Syrian state media is not sparing any chance to repeat over and over that the government is keen to implement the agreement it reached with the United States and Russia to destroy its chemical weapons.

Syria’s Prime Minister, Wael al-Halqi, who is actually playing a political role unlike most of his predecessors, said Syria will cooperate fully with U.N. inspectors charged with securing and destroying the country's chemical weapons stockpile.

According to the Huffington Post, a team of disarmament experts from the UN and the Organization for the Prohibition of Chemical Weapons began Sunday “overseeing the destruction by the Syrian government, and will verify that the process is correctly handled.”

The leaders of the superpowers are giving “credit” to Bashar al-Assad’s regime for this attitude. Secretary of State John Kerry said Monday that it was a “credit” to the Assad regime that the process of destroying the chemical weapons had begun in “record time” and with the compliance of Damascus.

The UN Secretary General Ban Ki-Moon also praised Mr. Assad for committing to the “sincere and faithful implementation of what they have said to prove that they are, (and) President Assad is, sincere.” His chief envoys also said, “The cooperation has been constructive, and I will say that the Syrian authorities have been cooperative,” OPCW Director-General AhmetUzumcu told reporters in The Hague on Wednesday.

But at the same time, the Syrian opposition is quite unhappy with the way things have been heading. All the hopes and expectations the opposition had on the eve of the so-called Western strike against Bashar al-Assad’s regime have vanished. The opposition has expressed its bewilderment at the change in the American and Western attitude.

Simply put, the equation has changed and now follows the logic that: Mr. Assad used chemical weapons; this is a red line that he has crossed; Assad promised to give up his chemical weapon arsenal; Assad is correcting his mistake.  The conclusion: let us keep the repentant guy.

This change has been reflected by the situation on the ground. The balance between the government and the opposition has been broken. It is apparent that the US-Russian agreement has struck a blow to what Washington categorizes as the “moderate opposition,” that can be relied upon.

Inside Syria, all the expectations that the Syrian people had a month ago evaporated with the smiles of Mr. Kerry and Mr. Lavrov after the meeting on Syria.

That might explain the card shuffling among the Syrian opposition in the past two weeks, as Abdulwahab Badrakhan from al-Hayat has explained. He wrote on Thursday that the Free Syrian Army command has realized that they have been fooled over the past year and that they were just wasting time listening the sedative talk of the Americans and Europeans.

The Islamist groups have made their choice, announcing that they do not recognize the Coalition as their political authority. Other political groups inside Syria have also distanced themselves from the “external opposition.” And the internal political opposition, known better as “the National Coordination Commission,” has a louder voice now, telling their constituencies, “Didn’t we tell you this would happen?”

The situation on the ground now is darker than ever. ISIS and Jabhat al-Nusra are dominating the largest part of the “liberated areas.” Many people in these areas say they wish they were in the regime controlled areas. Activists say that public executions and kidnappings of civil activists by ISIS have raised resentment among the very same people whose support it needs most. Many areas lack schools, police, hospitals, or even basic foods, clean water, and electricity. And there are now several different systems of law that are being applied within the Syrian territory, includingthe Syrian government’s laws, Sharia law, Arab Unified law (which many lawyers accuse of being too conservative), and conventional (tribal) law. People cannot commute between places, while the government employees must travel to other cities to get their salaries.

There has been an increasing recognition in recent weeks, explains Charles Lister, an analyst at IHS Jane's Terrorism and Insurgency Centre, adding that “some core moderates are beginning to feel aggrieved by (ISIS's) increasing influence, and recent clashes underline this.”

“A series of clashes in several northern and eastern provinces between jihadists and moderates in recent days suggests that these tensions are coming out into the open,” Lister told AFP.

So what better time for polishing the image of President Assad? He has given more interviews in one week than he did in a year. In all of them he wanted to show that he is not as bad as some might think. On Sunday he vowed to abide by the U.N. resolution calling for the country's chemical weapons stockpile to be destroyed, and he brushed aside a question about whether he would personally attend talks in Geneva, saying the framework of the negotiations is still unclear. Assad added that he is willing to hold a dialogue with the political opposition to try to resolve the crisis, but not with armed groups trying to overthrow his government.

Assad portrays himself as the stubborn fighter against terrorism. He accuses the opposition of lacking political views, and blames it for taking up arms, while he himself was the one who pushed them to do so, as Badrakhan says.

Now, despite the great defeat of giving up the chemical arsenal that his father spent 30 years piling up, Assad knows that this is the only way for him to stay in power. And he is happy to do that, trying the utmost to benefit from recent events. You want the chemical weapons, take ‘em. The west is happy with that. This regime has become a toothless one. A little rehabilitation will work, they think.