“Falaqa” refers to the way in which detainees are beaten on the soles of their feet with sticks and whips, sometimes to the point that skin becomes swollen and bleeds, making it impossible to walk 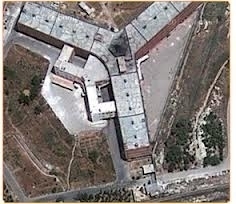 A report by Human Rights Watch (HRW) presented the unbelievable conditions of prisoners in Sednaya Prison.

The report stated that the number of prisoners has reached 14,000, most of whom went through a sham trial before a military field court, and many of them received sentences of more than 15 years.

Sednaya Prison consists of the “the red prison” [building] and a new building called “the white prison.” The red prison contains 8,000 detainees, including women and children. The white prison has about 6,000 detainees, 4,000 of whom come from military backgrounds of various ranks. Prisoners are transferred to Sednaya Prison after enduring interrogations that may last for months. The moment they arrive at Sednaya, the humiliating and torturous journey starts. They are welcomed with swearing and are hit with sticks and thick wires, according to HRW.

In the beginning, new detainees are put in solitary cells for about a month, to damage them emotionally and disturb their psychological balance. They are then transferred to common cells in the red prison. There, they stay in crowded cells where communicable diseases are spread easily. Inside the cells, talking is only allowed in low voices and praying is prohibited, the report detailed.

Moreover, according to the report, every day the cell’s guard is required to list at least ten names of detainees to receive brutal torture, which leads to death in many cases.

Members of the military who are detained in the white prison are forced to wear their uniform inside-out for humiliation, and sometimes they are forced to sit in a painful position for extended periods of time.

One technique [employed in the prison] is hanging [prisoners] from the ceiling by their wrists, with toes barely touching the ground, or completely suspended in the air with the entire weight on the wrists. This causes extreme swelling and discomfort.

The “tire method” is used to immobilize the victims by folding them at the waist and having their head, neck, and legs put into a car tire so that they cannot move to protect themselves from beatings on the back, legs, and head including by batons and whips

“Falaqa” refers to the way in which detainees are beaten on the soles of their feet with sticks and whips, sometimes to the point that skin becomes swollen and bleeds, making it impossible to walk.

The electrical chair or electrocution is a very painful and harmful method in which detainees are tied to a chair and are jolted repeatedly by electrical currents. The prongs were reportedly attached to sensitive places including genitalia, inside the mouth, and also on the neck, chest, hands, and legs.

With the “basat al-reeh” mechanism, detainees are tied down to a flat board, rednering them helpless to defend themselves, with their heads suspended in the air. Their hands and feet are then tied together. Sometime limbs are also stretched or pulled, or the board is folded in half so detainees’ faces touch their legs, which causes pain and further immobilization.

Concerning adolescent detainees, the report stated that their numbers reached around 2,500. They stay in the red prison and in cells for women. “They are subject to different kinds of physical and emotional torture, and most of them went through a sham trial before a military field court. Some of them were sentenced for 15 years of prison,” the report detailed.

Moaz, a former detainee in Sednaya Prison, told the story of Adnan Jizawi, a 16-year old boy from Baba-Amr in Homs, who was charged of spitting on the statue of President Hafiz al-Assad. “He was brought to the prison square by order of the First Adjutant, Fadi Slaiman. He was hand-cuffed, then he was thrown on ground to be beaten, stabbed and wounded with knives and stepped on, until he passed away. I am sad because I was not able to do anything to help him,” Moaz said.

In regard to health care in Sednaya prison, Moaz said, “there is no health care in prison. [Those in] critical conditions are left to die slowly. Wounds and injuries resulting from torture are left without care. I witnessed the deaths of 28 people in my cell during the 19 months I had spent in prison. Most cases were treatable, but [anyone] who knocks on the door asking for medical help receives 50 lashes with a thick cable.”

He then told a story of a detainee who insisted to see the doctor. A nurse came and gave him an injection in the neck and later he was found dead—the nurse had injected him with air to kill him and send a message to all the other prisoners.

Many communicable disease spread among prisoners, including typhoid, tuberculosis and skin infection from torture.

“Food is not more than half a loaf of bread, which is old and dry. Sometime they deprive detainees of food for two days, and cut off water for 15 days as a method for emotional punishment,” the report detailed.

Visiting also involves torture, since prisoners receive a session of interrogation after seeing visitors. And on their way to see visitors, prisoners are beaten and sworn at all the way to the meeting place. The visit does not last more than three minutes, and there is a one-meter distance between the two wire barriers between detainees and visitors. The report added that visits are not allowed for detainees in the white prison, and the prison administration denies the very presence of prisoners inside.

In regard to executions, the report said that prison’s administration executes detainees every Monday and Thursday night each week. They then take the bodies away in covered trucks to an unknown location. Parents are not typically informed of their son’s death.

But Moaz said that executions are done on a daily basis, with 40 detainees killed on average. Other detainees are forced to witness the process.

Moaz explained the method of executions, saying, “the detainee’s legs are tied to a truck, with another rope around the neck and tied to another truck. Then the trucks move quickly, which causes separation of the head from the body.”

Prisoners are buried in a mass grave near the red prison. Recently, however, the prison administration started to burn the bodies. Residents nearby can see the smoke and smell the distinctive odor of burned flesh, the HRW report highlighted.

Moaz appealed for help for the many detainees who are awaiting their death sentence and considered himself lucky to have left the prison alive.