The Druze are satisfied to follow their simple religious practices, which perhaps even go unnoticed by other residents 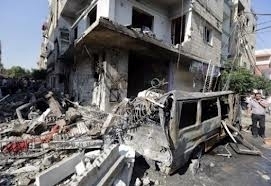 In Jaramana, various types of Shiite songs have recently arrived from Iraq, in addition to the sounds of mournful prayers and calls, either calling for the intervention of Hussein, or for his help in seeking revenge. Decked with yellow flags, SUVs freely roam the streets of the city, bearing posters calling for the attention of Hussein and Zeinab. And in other corners of the city, people from different parts of the country wander the streets, proudly wearing sectarian symbols and slogans on their shoulders. This is the new look of the city, which has become a hotbed for these certain kinds of militant groups.

This city, which is also inhabited by Druze and Christians, and which is not far from Damascus, has never before displayed the sectarian affiliations of its citizens. And this despite the fact that many have hinted that it is part of the sectarian conflict so increasingly engulfing Syria. Sayyed Hassan Nasrallah, Hezbollah’s secretary general, has also referred to Jaramana more than once in his speeches over the last couple of years, as did the Russian foreign minister, who said he was “heart broken” by what had happened here, after a car bomb was detonated last year.

The Druze are satisfied to follow their simple religious practices, which perhaps even go unnoticed by other residents. Their places of worship are very modest, in accordance with their principles of asceticism and mysticism, similar to the guiding Christian rituals. In spite of the increasing number of churches over the last 20 years, the latter’s presence can be summarized by the sounds of the church bells, and even those are barely heard in some areas of the city. For decades this coexistence between the Druze and the Christians has been the norm, and the city has never witnessed any sectarian conflicts or clashes. Not even with any of the surrounding Sunni villages either.

The reason for this peaceful local coexistence, until today, might perhaps have been an entrenched understanding for the principles of mutual respect, and a widespread decision not to flaunt one’s religious symbols in the face of others. But today Jaramana can no longer claim such a neutrality, with a recent proliferation of sectarian representations and demonstrations, displayed on vehicles in the form of explicit slogans and religious images. The city has become a magnet for external sectarian affiliations, which have intruded upon Jaramana. Now, it seems, all is needed to transform it into one of Beirut’s southern suburbs is a giant poster of Nasrallah, across the width of a building.

Jaramana extends into the Ghouta suburb of eastern Damascus, an area which has witnessed violent clashes between the regime and the armed opposition. This has rendered Jaramana very important for the regime, which has, since the beginning of the conflict, chosen the city as a base.

But at the outbreak of the crisis, it was very rare to see a foreign soldier in the city, such as a Hezbollah member, or a fighter from any other Shiite militia. When it did happen it created a lot of discussion among the city’s inhabitants. This is because the foreign militants initially attempted to hide their identity, and avoided mixing with people. But after the passage of time, they have abandoned this initial caution, and no longer attempt to hide their sectarian identity: the reason that they came to the area in the first place.

And gradually it came to be that they started displaying their sectarian background deliberately, without shame, and without taking the feelings of others into consideration.

But the city today seems to have accepted this new reality, just as it has grown accustomed to the scene of women returning from funerals, nearly every day, and the influx of hundreds of families arriving to the city from dangerous areas, seeking a peaceful place in which to live.

Undoubtedly the city did not seek to become a sectarian stronghold, but nor did it make an attempt to challenge this development, so that now, if it wanted to control it, it could not. But nor does it seem inevitable that stirring resentments will reach the point of open confrontation.

However, how the city continues to react to such open provocations may be a sign of what is to come, in terms of the continued infringements on the once coexistent nature of Jaramana. The regime has managed, largely, to win the support of minority groups, and not really involved them in the conflict until today, by claiming to be a secular force, fighting against extremism.

It seems the regime will not hesitate in introducing purely sectarian groups to different areas, inhabited by minorities, and will pretend not to notice their behavior. So has it forsaken its role as a defender of the minorities, as it has always claimed to be? Or perhaps, have these minorities become a heavy burden upon its shoulders?