Several family members were killed by the Syrian regime, just because they had taken part in these rallies 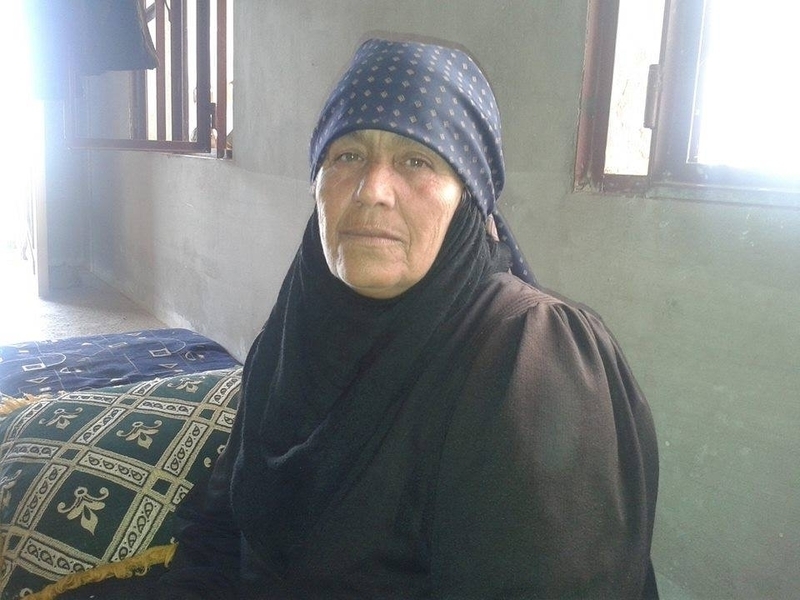 Om Ali (Mother of Ali) somehow manages to live on, in her misery, despite having lost two of her sons within the same hour. At 70-years-old, Om Ali has turned her home into a guest house for Free Syrian Army fighters after every nearby battle, here in the town of Busra, in the Deraa countryside. She cooks and cares for the men as if they were her own sons, and they have taken to calling her “mother.”

She lost her own husband 35 years ago, and says she is used to this life of heartache. She recalls raising three children on her own, while finding the time to produce homemade Arabian margarine, and selling it so that her sons could continue their education. Omar, Mohammed and Ali: each one is “a piece of her soul,” as she puts it.

Om Ali didn’t think that she would grow old with her youngest son, Omar, alone, but this appears to be God’s will, she says. “When the Syrian revolution began, I encouraged my sons to participate in town. I woke them every Friday morning, and told them whenever I heard about a new demonstration. The oppression that we have lived under motivated us to rebel: my sons and I used to know the meaning of the word ‘freedom.’ What memories!”

Before the revolution started, in early 2011, Om Ali’s eldest son Ali worked as an Arabic teacher in town, to support his wife and children. When the revolution broke out, Ali was responsible for writing signboards for the demonstrations. He resigned from his job to work with his brother Mohammed in the grocery store, which later became a gathering place to arrange the details – the timing and slogans – of the next demonstration, she says.

Several family members were killed by the Syrian regime, just because they had taken part in these rallies, she says. Two of her nephews were killed and her elder brother was seriously wounded, an injury that nearly cost him his life. When the revolution became armed, Om Ali encouraged her two eldest sons to enlist in the Free Syrian Army if they wanted to, as she believed in the urgent need for meaningful change for the country. It was also so hard, she says, to stand silent when faced with the daily slaughter of fellow Syrians.

The 13th of October, 2012, is a date that Om Ali remembers very well: her two eldest sons had gone to join the Busra al-Sham battalion, which was attempting to prevent the Syrian regime forces from entering eastern Deraa countryside.

“I had a feeling that this time would be different. I kissed Mohammed and Ali and hugged them tight, while they promised me that they would return victorious. But they never did. They were martyred along with 10 of their friends within one hour.”

Om Ali found out they had been killed after a few days, but she never had the chance to kiss them goodbye, as they were buried in a mass grave in al-Giza village in the Deraa countryside. She just wishes she could have held them one last time, but the arrival of regime forces in the eastern area of Deraa prevented her.

She has grown accustomed to hiding her tears now, despite this pain of separation and grief. She tries to accept the deaths of her sons, but a longing overwhelms her sometimes.

“They died for the country. They always fought on the front lines of the battalion, protecting and supporting each other. I am so proud of them both, but now I have only Omar.”

It is a hard weight to bear for Omar, 30-years-old, who is also having to deal with the loss of his brothers. He admits that he cries sometimes, but has left his work in the archeology sector to join his brothers’ battalion, hoping to continue their fight.

“I respect my mother’s resistance so much. She encouraged me to join the FSA, and every time I see her she prays for our victory and kisses my face over and over. My biggest fear is that she might be left to live alone: my life is not my own now,” Omar says.

After each battle, Omar and his friends visit his mother’s house. Her years do not prevent her from cooking for sometimes 12 fighters in one sitting. Om Ali sits with them as a mother, listening to them and laughing with them, seeing her sons in their faces. Her sons will always be a part of her soul, a soul that knows no despair, despite the daily challenges of reality.