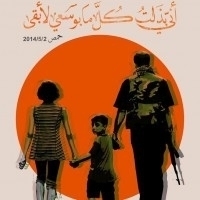 Despite the offensive behaviour of the Syrian regime, with its army and Shabbiha militias, Bashar Assad has been nominated again for president.

The regime has gone beyond just the entrance to besieged Homs, raising the banner of victory, as if it had been achieved in battle or a fair and equal political agreement.

The regime has won in Homs; this is a fact that can’t be avoided through words of consolation or false hope. But the regime hasn’t won the battle according to the concept of victory in the classic sense, in which the good triumphs over evil.

After two years of siege, we can today narrate many stories about the victories of Homs and as well as about the victory of the regime. Over 30 months of siege, children continued playing and people didn’t stop celebrating Eid. All lifeforms in the besieged area resisted the regime and triumphed. Every day, for nearly nine hundred days, life triumphed in Homs, defeating death.

The regime achieved victory for just one day. It celebrates its victory through allowing its forces and Shabiha to enter the old quarters of the city and desecrating the abandoned houses, looting the homes that resisted its brutality for two and a half years.

The tomb of the Father Franz, in turn, is another form of victory. The decorations on it and the gray marble of its garden all serve as details of the  triumph over attempts by the regime to reassure the minorities that they are their protectors.

A Christian lady, who left Hamidiya, with her white hair and pale face shows that nobody forced her to weart the veil over the two and a half years, nor subjected her to any kind of harassment. This is another triumph over the tales circulated by the regime about terrorists and extremists.

“Steadfastness in the Oven” is another story of a particular kind of victory. It is the name of a meal that used to be prepared for breakfast in besieged Homs. The dish is derived from the life that was allowed 950 fighters to resist despite starvation.

The meal  is prepared from spices that remained in the houses, including coriander, hot peppers and seeds, kneaded and fried to become a hot meal that was offered in the morning. The invention is considered a powerful types of resistance. It represented a way of creating life out of the dusty flavored remnants. The name was inspired by the reality of the siege applied on the city, and from the imagination of the inventor of the dish, who perhaps thought, while preparing it, that its flavor would be better if it was fried in the oven. Like the siege, the name is simple, but sounds bitter.


The use of food as a weapon by the regime to starve besieged civilians and fighters pushed them to use the same tactics as a form of resistance. The names of the meals prepared with limited resources under the siege become acts of resistance themselves. For example,  thyme pie became “resistance pie”, while  Jew’s mallow became “the resistance Jew’s mallow” when its ingredients became mulberry and fig leaves.

The victory of the rebels are summarized in the words of one rebel, written on the wall before he left: “In case I leave, be sure that I did all I could  to stay.”

Meanwhile the victory of Assad can be summarized in the phrase "Assad's men” that his soldiers write over the phrases of the rebels when they enter the besieged areas. They leave the devastation behind, and corpses in the streets, but are only concerned with writing the phrases of al –Assad on walls, raising the flag of the regime, and taking silly photos in front of the destruction to remember well how they entered the city, the city that resisted by all means, shown in the details of everyday life.

The regime victory was enough to make them try to remove any revolutionary mark they pass by and to resume the normal life in the city as soon as possible. That message has been well received by all those who entered to find bones at the door of their houses and corpses in the streets.

Translated  and edited by The Syrian Observer