Friends and members of the missing activists’ families have accused the Army of Islam, a main faction of the Islamic Front headed by Alloush, of detaining the four activists 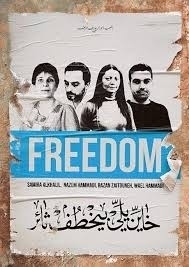 Syrian activists launched a social media campaign calling for the release of missing members of the Violations Documentation Center in Syria (VDC). Activists Razan Zaitouneh, Samira Khalil, Wael Hamada and Nathem Hamadi were abducted by unknown militiamen on December 9, 2013 from their office in the city of Douma, which is controlled by the opposition coalition Islamic Front. Their location has been unknown since then.

The media campaign includes a call for signing a petition written in six languages, which demands the release of the four activists. Forty five Syrian and international human rights organizations, including the Institute for War and Peace Reporting, also demanded the release of the missing VDC activists. The statement issued by the organizations holds the Syrian government and armed opposition factions responsible for the safety of activists and journalists working in the areas they control.

So far no faction has claimed the abduction of VDC members. Friends and members of the missing activists’ families have accused the Army of Islam, a main faction of the Islamic Front headed by Alloush, of detaining the four activists.

Alloush has denied any responsibility for the kidnapping. He said in an interview that the Army of Islam does not operate inside the city of Douma, describing the armed factions that do as “rogue battalions” without naming them. The Islamic Front’s military spokesman Islam Alloush commented on the abduction of the four activists in an interview published earlier this month. He said that the Army of Islam is the largest faction in Eastern Ghouta where Douma is located, but is not responsible for the capture of VDC members. He added that the abduction is under investigation.