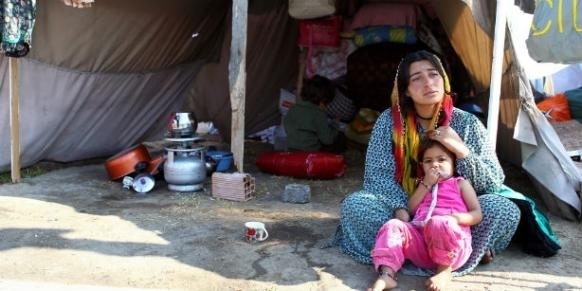 In a small shop filled with thobes and fancy abayas, Mohammad al-Rifaei sits behind a desk. He's been in İstanbul for two years now, having fled Syria after being imprisoned by the regime for one year. A merchant from the Souq al-Hamidiyah in Damascus, he has built a new life in Aksaray, a neighborhood of İstanbul that has become a refuge for immigrants from all over the world. But like many others, it hasn't been an easy process.

“I rent this shop for about TL 2,500 a month, but I know if I were Turkish they would rent it to me for at least TL 600 less,” he said. “My friend has a shop in Taksim and, within months, his rent started increasing by thousands of dollars until it reached $110,000 a month. Beyond that, even putting down a deposit is much more expensive for Syrians than it is [for] Turks.”

Many Syrians in this bustling neighborhood of İstanbul have similar stories to tell. The massive influx of Syrians has had a noticeable effect on daily life. Walking through the crowds in Aksaray, one regularly catches conversations spoken in the dialects of Syria. But as in many countries hosting a large number of refugees, relations between the residents and refugees have deteriorated over time. Syrians looking for work or housing in İstanbul complain bitterly of discriminatory treatment, claiming that Turks pay them less and charge them more.

Abdderrahman Abourde, from Aleppo, has been in İstanbul for two months. He said Syrians regularly experience unfair treatment at the workplace. Besides receiving lower wages, Syrians are expected to work longer hours.

“On Saturdays, the Turks get the day off. But they work the Syrians all Saturday,” Abourde said.

Things haven't always been this way. Many Syrians say they were initially welcomed to the country as refugees.

While Turks may have once been more open and accepting of Syria's refugees, the long war has taken its toll on Turkey as well. With no end in sight to either the conflict or the influx of people seeking refuge, coupled with domestic political crises and the threat of violence spilling into Turkey, some Turks have become frustrated. Not only are Turks tired of competing with Syrians for jobs and housing, they also attribute the rise of panhandling and crime to the influx of Syrian refugees.

“They [have] ruined our country,” said one Turk from Aksaray, speaking on condition of anonymity. “We respect them as neighbors. We opened our [hearts] … to them. And now we hate them, hate them deeply.”

Syrians say they are often told to “go back home” or are blamed for “destroying” Syria. Abourde says he experiences this kind of hostility in his daily interactions.

“One time I was at the bazaar and I asked a vendor why the apple prices were so high. He said, ‘If you don't like it go back to Syria',” Abourde recalled.

However, the Syrian experience with prejudice in Turkey is varied and often class-based. Those who are college educated were able to flee Syria with their passports and had some means of establishing themselves have reported better experiences than those who fled with little to nothing. Yusuf Basha, who fled Hama over six months ago, said he was able to find a job within two days. He attributes this to Turkey's previous experiences of receiving refugees.

“People in İstanbul are used to the existence of foreigners in their country. When the problems began in Iraq, they welcomed Iraqis into their country. They've treated us very well,” Basha said.

Others, however, report having a more difficult time. Zayn, a young Syrian who did not wish to provide his last name, says he is excluded from the job market. Zayn defected from the Syrian army and arrived in İstanbul a few months ago, without identification and looking for work.

Syrians fleeing their war-torn homes for Turkey are not classified as refugees by the Turkish government; rather, they are "guests with temporary protection." Because of the nature of the war, many Syrians have had to flee their homes quickly, often leaving behind their passports and national ID cards.

Without documentation, Syrian refugees cannot receive benefits or apply for work permits. Children who do not have passports cannot apply for the residence authorization required to enroll in school. Acquiring such documents often entails a lengthy bureaucratic process that might be difficult for refugees to navigate, especially without money to pay for the administrative fees and without command of the Turkish language. Fatima Muhammed, a 26-year-old Syrian mother of four, arrived in İstanbul two months ago with her family after giving birth to her son in the refugee camps near the border.

“I went to go get an identification card for my son,” Muhammed said. “They said I had to go to another department, which said that we needed money. When we didn't have the money, they asked for our passports. We don't have those. They told me nothing can be done for us. My son was born on Turkish soil.”

Muhammed lives in an apartment with 15 of her family members. Many of the children in the family work, though illegally, and have faced abuse and mistreatment in the workplace. Her daughter, age 12, was sent away from the sewing factory where she worked after she asked for her wages. Her daughter isn't the only member of the family to have been denied her wages.

“My husband and brother found work in sewing factories and they were told they'd be paid TL 400 a week. But it's been two months and they still haven't been paid once,” Muhammed said.

Still, many Syrians like Muhammad say that Turkey has been a more welcoming place to them than any other country in the region would have been. Nidal Aboubaker, a 37-year-old from Aleppo, says despite any difficulties or racism he may have experienced, he is very grateful.

“In fact, I've felt like Turkey is our country,” Aboubaker said.