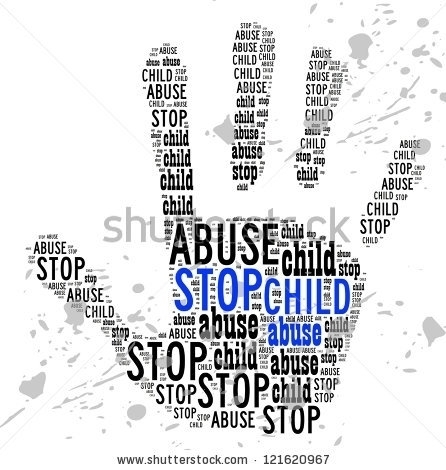 A five-year-old child, Mohammed al-Khouli lies in a green waste container. His hair is black, thick and silky. He wears a black and blue cotton pajamas. Hiding his head between his hands as though playing hide-and-seek, we cannot see his his face, but we can imagine it.

He has small black or perhaps lighter colored eyes; we do not know if his eyes were open or shut when he was found. He has a small mouth and young rosy cheeks. The weather was not cold yesterday, and Mohammed has his shirt off, like most neglected children, eager for playing and life.

We may note from the image that Mohammad exaggerates in his enjoyment of play; he is not just hiding in the green waste container, his body is immersed in a small carton for bags of chips, with the flavors clearly written – salt and vinegar.

Moihammed goes further than that;  his head is buried in a black garbage bag, so we can see nothing from him but his thick, black hair. In order to reinforce his position in the game, he wears on the back of his neck a worn cloth found in the rubbish. For even greater camouflage, he colors his back with blood and lets it flow as if a professional has painted him in preparation for his last hiding.

It was the last hide-and-seek game played by Mohammed, a child who fled with his family to Halba, in Akkar after escaping the tragedy in Syria.

The Syrian displacement is not just a displacement, it is a daily test of endurance in the face of psychological and physical loss, racism and the feeling of temporary which circumvents permancy day after day.

Two years ago, when he was three years old, Mohammad came to Lebanon from the city of Homs, accompanied by his family. We do not know how Mohammad spent the past two years. Did he play enough? Did he love Halba more than Homs? Did he dream of attending school, though  he had never carried a school bag before now?

It's the imperfect life experienced by most Syrians during the last three years; a life without the normal rituals like going to school, burial and mourning. Mohammad is a Syrian child from Homs and paid the full price, like other Syrian children for doing so.

He grew up prematurely. His father had sent him just yesterday morning to buy him a pack of cigarettes from the nearby shop. The shop sells coffee and it is owned by a Lebanese man. Mohammed already knew the way between his home and the shop by heart. He even knows the type of cigarettes his father smokes. He knows how to pronounce the name and how to pay and wait for the change.

But he does not know that the son of the shopkeeper,16, wants to rape him. Just wants to rape Mohammed, the Syrian from Homs, the neglected child.

Yes, he was neglected. There is something that gave this impression to the rapist. A neglected child who belongs to neglected people. There is a legitimacy that allows anyone to do whatever he wants with this neglected class, who has lost its home, its homeland, its personal identity and its existence, so what may prevent someone from raping this child.

Some Lebanese woke up in the morning to the image of Mohammad, thrown in the waste container, blood dried on his naked back, sunk between black bags and cardboard boxes, where his killer threw him as a garbage. Some Lebanese denounced the image and blamed the media for publishing the picture, which "spoiled our morning".

Are your mornings so serene already? What makes them serene? Didn’t the same newspapers publish two days ago the picture of the Lebanese citizen, Tamara, who was severely beaten by her husband? Didn’t her image, with her swollen eyes, spoil your mood? Does racism spoil your lives? We live in a time when the publication of the picture is the issue, not the rape of a child, nor the idea of stabbing him five times and then discarding him in a trash container. Perhaps someone should come out to say that because Syrians are regressive and lazy, they send their children to buy cigarettes, so they deserve to get raped or kidnapped.

Resentment to the publication of the image of Mohammad is similar to the severe beating suffered by Tamara two days ago. It is also similar to the news reported in Al-Nahar yesterday about the arrest of a prostitution network in the area of ​​Kaslik; most of the women involved are Syrian.

It may seem like the usual news, but the headlines are painting the image of the Syrian as an object, a worker, a security man, a bitch or those who distort the image of the Lebanese streets by clutching a camel.

Some people want to insult the Syrian, who was much more courageous than others, and who rebelled against the regime of which the Lebanese suffered perhaps equally. The Syrian who lost his sons in combat or under torture is still able to breathe, is still able to overcome the image of being neglected.

Translated and edited By The Syrian Observer