The UN plan did not even see the light of day; instead, it remained an “initiative project" 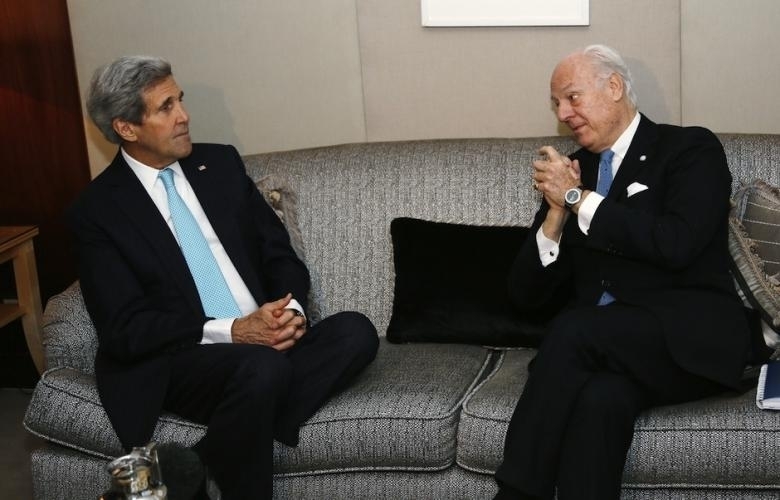 The Aleppo plan has stalled, as has the work of the United Nations envoy to Syria, Staffan de Mistura. A crisis of confidence appeared quickly between Damascus and the Swedish diplomat. The Syrian capital is still in contact with de Mistura but it deals with him as the US-French envoy.

Since his appointment last July, de Mistura has not been able to gain the confidence of the warring parties in Syria. Before he visited the region, the United Nations was abuzz with his refusal to move to Geneva, preferring to stay in Brussels for “family reasons.”

During his visit to Damascus and the broader region last September, de Mistura presented a plan to “freeze the fighting in Aleppo.” Then his deputy, Ramzi Ezzedine, came to Damascus to follow up on the plan.

De Mistura also presented the plan to the UN Security Council. It included a freeze on fighting in certain areas to allow the transfer of aid and to pave the way for negotiations. “I don’t have a peace plan but an action plan to ease the suffering of the people,” said the diplomat, suggesting that the city of Aleppo is a good candidate to become a freeze zone.

However, the UN plan did not even see the light of day. Instead, it remained an “initiative project.” The battlefronts in Syria’s economic capital and its countryside prevent any discussion of halting the fighting.

The Syrian army and its allies seek to encircle the city and isolate it from its countryside, which has access to the Turkish border, and from the area controlled by the Islamic State in Iraq and Syria (ISIS). On the other hand, the armed opposition is desperately trying to break this encirclement and open nearby battlefronts, such as the Nusra Front’s latest attempt to enter the towns of Nabul and Zahraa in the city’s northern countryside.

Sources privy to the line of communication between the UN special envoy and the Syrian leadership stress that contacts between the two sides are ongoing. Damascus is waiting for clarifications about certain issues within the plan to halt the fighting in Aleppo proposed by de Mistura. The sources point out that these clarifications will be made by Ezzedine when he comes to Damascus.

Other sources, however, that have links to the Syrian leadership and to de Mistura stress that Damascus has lost all trust in him. Although the leadership in Syria deals with any UN envoy as a US-French envoy, it still wanted to give the Swedish diplomat a chance, especially in light of their Russian ally’s wish not to give the West an excuse to accuse Damascus of obstructing any attempt at a political solution. These sources said that the Syrian leadership lost trust in the UN envoy, who seemed to be trying to trick Damascus into agreeing to a vague plan intended to establish a buffer zone in northern Syria, specifically in the countryside, stretching from the city of Aleppo to the Turkish border.

According to these sources, when de Mistura proposed the “plan to freeze the fighting in Aleppo,” Damascus agreed to it in principle but demanded some elaboration on the position of the countries supporting the fighters and their pledge to stop arming, funding and training them. It asked de Mistura to secure their commitment to stop sending weapons, fighters, and money to the areas where the plan is to be implemented, pointing out that freezing the fighting should not lead to a de facto division of Aleppo by leaving fighters entrenched in their current positions. Damascus confirmed that it accepts any plan to halt the fighting in order to pull the fighters out of the city and bring it back under the auspices of the Syrian state.

The proposal also entails another dangerous development, according to the same sources: it legitimizes the presence of the Nusra Front, Al-Qaeda’s branch in the Levant.

De Mistura told Syrian officials what they wanted to hear, then went to Turkey and Europe where he told Turkish and Western officials what they wanted to hear. He expanded his plan outside of Aleppo, to include its countryside, asking for guarantees to freeze the fighting along the existing demarcation lines while allowing “both sides of the conflict” to regularly rotate their forces in their current positions and to bring in provisions and supplies freely. The sources argue that, in practice, this proposal means accepting the division of Aleppo and recognizing the authority of armed opposition groups on a large swath of Syrian land that is contiguous with the Turkish border where they can be trained, equipped and moved to other areas.

The proposal also entails another dangerous development, according to the same sources: it legitimizes the presence of the Nusra Front, the lead opposition group in Aleppo and its countryside, in the Aleppo area.

An Arab diplomatic source described the way Damascus is dealing with de Mistura as follows: “The Syrians are not going to cut off contacts with the UN diplomat. They will postpone meetings and ask to meet with his deputy, he then might come and go several times. By then, the story would be over, the political and battlefield conditions would have changed and the UN envoy would be out of the picture.”