My memories took me back to the last demonstration I participated in, back in June 2012. Security forces had spread out in the area, although today there was no sign of bullets or tear gas. Instead of chasing everyone out of the area, the soldiers who had formed a cordon around the demonstrators were laughing and smoking. 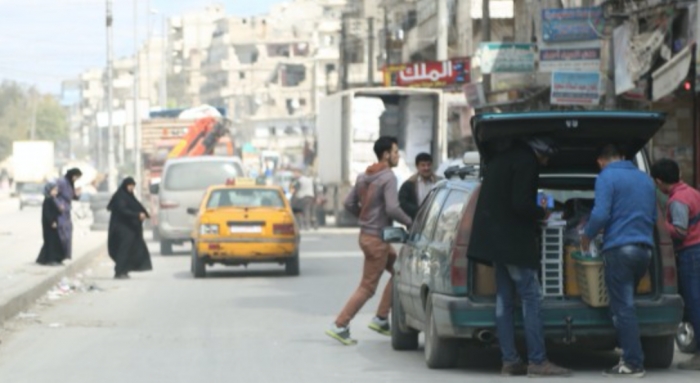 August 8, 2015, dawned on Lattakia like any other day. Residents of the Syrian port city woke up and went about their regular business, grumbling about the lack of water, the regular power cuts, and the price of basic commodities.

Statements by the Syrian government consistently announce that “the situation is under control”. This does not seem to apply to the provision of basic services.

Towards the end of the day, as I was making my way home, my mobile phone rang. It was a friend of mine who asked me to meet her urgently at the Zira roundabout.

Zira is an Alawite neighborhood which I do not like to go to. Those of us opposed to the government call it “Mini-Chicago”, a place where the shabeeha (pro-government paramilitaries) act as though they are above the law. Still, my friend had told me it was urgent, so I hailed a taxi to take me there.

During the journey, I couldn’t stop thinking about my mother. I had just ignored her numerous warnings never to take a taxi alone, not because of the hefty fares, but for fear I would be kidnapped.

Abductions for ransom happen every day in Lattakia. Millions of Syrian pounds are demanded for the release of a loved one. If the family cannot raise the money, the kidnapped person will be killed.

The authorities claim that they are helpless to do anything about it. Many people believe this implicates them in the scheme.

Whatever the truth of that, it does not seem that “the situation is under control” holds true when it comes to safety and security.

As the taxi driver approached our destination, the roads became heavily congested. He told me I would get there faster if he dropped me off and I continued on foot.

I got out of the taxi and was surprised to hear chanting voices in the distance. With every step I took, the voices grew louder, and so did the pounding of my heart – was it possible the Alawites were finally rebelling?

My memories took me back to the last demonstration I participated in, back in June 2012. We had gathered in front of the local mosque in al-Saliba neighbourhood on a Friday afternoon. When the imam began his prayers with the words “Allahu Akbar”, the crowd outside the mosque raised the revolutionary flag and chanted anti-government slogans. We filmed scenes of the demonstration to upload later on YouTube and other social media pages. None of us knew each other, but for a short while, we were as one.

Soon after, armed security forces moved in, firing bullets and tear gas at the crowd. We dispersed and ran for shelter in the surrounding buildings. Residents flung their doors open and offered us safety in their homes.

As I reached the Zira roundabout, I looked forward to reliving those memories. I anticipated the rush and excitement, but as I looked around me, I was astonished to see that the situation was “under control”.

Security forces had spread out in the area, although today there was no sign of bullets or tear gas. Instead of chasing everyone out of the area, the soldiers who had formed a cordon around the demonstrators were laughing and smoking.

I joined the crowd and listened to the slogans I heard around me.

“Those who do not join us have no religion,” one group was chanting.

“The people demand the execution of Suleiman,” chanted another.

Suleiman al-Assad is a relative of President Bashar al-Assad. In early August, there were reports that he killed a Syrian army general whose car had overtaken his own. The incident sparked a wave of protests in Alawite areas normally loyal to the Assad government.

“What do you think will happen?” I asked a man standing next to me.

“We won’t go home until Suleiman is executed,” he said. “We are prepared to sacrifice ourselves”.

His words filled me with excitement. This was a good start, I thought. The revolution in Daraa had begun with a simple demonstration. Perhaps the Alawites felt as drained by the war as we did. Perhaps they were ready to join the revolution and change the status quo. Perhaps salvation was finally coming.

Someone whispered to me that not all Alawites were happy with this demonstration. I silently prayed for them to remain divided. I wanted this small protest to grow into a revolution that would topple a leader who had dragged the whole country into an atrocious war.

Around an hour later, an officer approached us and said, “That’s enough for today, its time to go home.”

I held my breath. Surely people would refuse to leave. Surely they would insist on staying. The arguments would spark a riot, and we would be chased out of the area, just like the good old days.

Unfortunately, it was wishful thinking.

Within minutes, the demonstrators left the area, some of them chanting slogans in support of Bashar al-Assad on their way home.

In minutes, the spark of hope that had grown inside me for the past hour was killed.

The next day, I asked whether there were signs of another demonstration in Zira, only to be told that no one had shown up, and that “the situation is under control”.

Bana Deeb is the pseudonym of a Damascus Bureau contributor living in Lattakia. She is a graduate of Damascus University, and hopes to find work educating the next generation in Syria.

This article was republished by The Syrian Observer with the approval of Damascus Bureau.