We huddled together crying while they rampaged through our home, smashing things to pieces and throwing our personal belongings out on top of us. 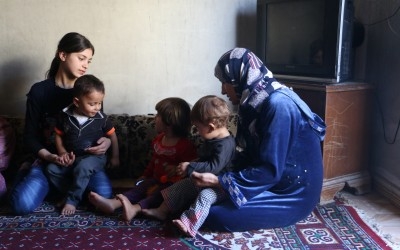 I will never forget the day my brother Yousef was arrested – January 22, 2012 – and the events that followed.

Seven government soldiers stormed our house and forced us out into our garden. They dragged Yousef, who was only 15 at the time, away from us and savagely beat him before our eyes. They never stopped smiling throughout the whole encounter.

We huddled together crying while they rampaged through our home, smashing things to pieces and throwing our personal belongings out on top of us.

When they finally left, they took Yousef with them.

Distraught, I ran to a neighbor’s house and begged him to help us. He was an army volunteer and I hoped he could rescue my brother. He promised to do his best, and sure enough, Yousef was released and came back home four hours later.

That was not the end of our woes, though.

As we settled down that evening, a frightening lull seemed to envelop our house. It was pitch black outside, and very quiet. Even the stray dogs had stopped barking.

My father gathered us around him and began telling stories to break the silence and calm our increasing fear.

Suddenly, the sky turned red. I thought the end of the world was upon us.

A loud explosion followed by rounds of gunfire brought me to my senses. Windows and glass crockery shattered around us. Bullets punctured the water tank on our roof, and water began showering down on us.

“Enough,” my sister screamed out of the window, “Stop shooting!”

My parents gathered us all in one corner which they deemed to be safer. We sat there terrified, thinking of what was going to happen to us.

All of a sudden, my eight year-old brother Ali screamed.

A bullet had passed through a window, shattering a mirror that sliced into his arm.

My father could not take him to hospital due to the heavy clashes. Besides, the army had imposed a curfew starting at seven each evening.

The only thing we could do was search for our first aid kit so as to tend to his wounds.

The following morning we woke up early and left our house in Kfar Nabel. None of us could bear the idea of suffering a repetition of the previous day.

It had snowed overnight which made it too difficult to carry any of our belongings. We fled with nothing.

We headed to my grandmother’s house. She welcomed all nine of us with open arms.

“How are we all going to fit in here?” my mother asked her.

“What will happen to us now?” my younger sister Zeinab added.

None of us had an answer.

We ended up spending a week at my grandmother’s house. Despite the sunlight that flooded through its windows each morning, it was bitterly cold.

We then moved to a new house in the village of al-Jabal, which had no military presence. We thought we had seen the last of government soldiers. We were wrong.

On April 2, 2012, I woke up to the sound of heavy gunfire. The government had stormed a rebel outpost in the northern part of the village.

I snuck to a window to see what was happening, and witnessed a murderous scene that I will never forget.

A group of government soldiers had arrested a man. They walked him outside, kicked him to the ground, and sprayed him with bullets.

Someone pounded on our front door. When we opened it we were relieved to find it was my aunt.

“All the government defectors are in the northern part of the village. May God have mercy on us,” she said.

We burst into tears. My father, brother, and five of my uncles were in that area, and we had just seen a government tank heading in their direction.

We spent the day sitting next to the phone, waiting to be told if they were dead or alive.

Another aunt of mine called to give us whatever updates she heard about the offensive. Each time the phone rang we would tremble in fear.

After a long wait, we finally received news that my father, brother and four of my uncles were safe.

My fifth uncle Iyad Yousef, who was an army defector, had been captured.

He had been tied to the rear of a tank and dragged all the way to Kfar Nabel. He was tortured for two months, then set free.

Around six months after we fled our house, Kfar Nabel was liberated.

My family and I went back home on August 10, 2012. There was no sign of government troops or tanks in our streets.

Gradually life trickled back into our neighborhood. The government came back too – this time in planes and helicopters.

Still we were all very happy to be home.

I remember walking into to our house one day after visiting a friend, to hear an unfamiliar sound: laughter.

Several of my mother’s friends had gathered at our house and were celebrating the fact that the government troops were now gone.

My father summed up what we all felt perfectly.

“Thank God we are back home,” he said. “Displacement strips people of their dignity.”

Amina al-Yousef, is the pseudonym of a Damascus Bureau contributor who lives in Idlib. The 21 year-old is a law-school graduate and has been displaced along with her family numerous times over the past four years.

This story was republished at The Syrian Observer at a special agreement with Damascus Bureau.