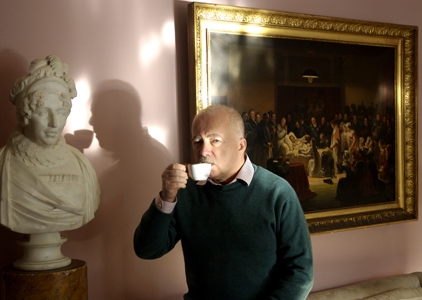 In a bizarre coincidence, this fascinating portrayal of Aleppo, one of the Middle East’s most fascinating cities, came out exactly on the day that Russian President Vladimir Putin announced the withdrawal of his forces from Syria. One stated objective of the Russian intervention was the “liberation” of Aleppo from “terrorist groups” and its handover to President Bashar al-Assad’s forces.

It is possible that the book’s subtitle, which includes the word "fall" was chosen in anticipation of Aleppo’s fall to the combined forces of Russia, Iran and Assad. If that was indeed the case, I.B. Tauris editors were not alone in expecting Aleppo to fall after suffering six months of carpet-bombing by the Russian air force and artillery attacks by Iranian units plus Lebanese, Afghan and Pakistani mercenaries recruited by Tehran.

In a symbolic gesture earlier this year, the king of Bahrain, Hamad bin Issa, even presented President Putin with a Damascene sword, recalling a tradition that started in 1260 when the Mongol Khan Hulagu entered Aleppo and razed it to the ground after receiving a Damascene sword as a sign of submission to the conqueror. (In Islamic tradition the infidel conqueror gets a Damascene sword while the Islamic warrior or ghazi is presented with an Indian scimitar known as muhannad.) However, though inflicted with numerous wounds, Aleppo did not fall to the Russo-Iranian invaders, manifesting, once again, its amazing resilience.

Aleppo is one of a dozen or so ancient cities that, in one form or another, seem to have been there from the very beginning of time. Mansel dates the city’s origins as far back as 2500 B.C., making it one of the oldest urban settlements anywhere in the world. In its long history, Aleppo has also been a melting pot of peoples and civilizations. It has been home to Chaldeans, Assyrians, Hittites, Hebrews, Elamites, Persians and, more recently, Kurds, Ottomans and Arabs. According to Jewish and Arabic legends Abraham, the grandfather of the monotheistic religions, “milked his goats there and dispensed the money from its sale as alms, hence the name of the city Halab, Arabic for milk.” Mansel writes.

To outside observers, Aleppo today appears like a battleground for the latest version of religious wars that have marked the history of the Middle East for millennia.

This time the Alawite (Nusayri) minority is trying to regain control of the city with support from Lebanese Shiite militias recruited by the region’s main Shiite power, the Islamic Republic of Iran. The city’s Sunni Muslim majority and Christian and Druze minorities are fighting to frustrate that ambition.

Long before that, however, Aleppo was a prize in constant wars between the Roman and Persian empires, changing hands several times. Later, during the Crusades, Aleppo became a battleground between Catholic mini-kingdoms established by the Franks and Orthodox, including Armenian, statelets often allied to Muslim emirs and khans fighting against the invaders from Europe. Still later, Aleppo became a key base for the Sunni caliphate under the Ottomans in wars against Shiite Iran under the Safavids.

What is amazing in all this, as Mansel demonstrates, is Aleppo’s success in also acting as a cradle of culture and civilization. It has been home to several Sufi tariqas (paths) and, in more recent times, a focal point for modern political ideologies including socialism and nationalism.

While Damascus was the capital of the desert, Aleppo was the heart of the fertile plain; the two forming what is Syria today.

The first part of Mansel’s book, 67 pages to be exact, is written as an obituary of Aleppo. The tone is somber, not to say funerary. The writer narrates how the Assad clan, under Hafez and Bashar, tried to crush the city’s creative and, necessarily, rebellious spirit. He even argues that Bashar purposefully created the so-called Islamic State or ISIS (Da’esh in Arabic) in order to persuade the Aleppans that their choice was limited to tyranny under the Assads or slavery under the self-styled caliph.

Mansel writes: “States and religions are killing Aleppo. People and monuments are dying….In the 21st century, Aleppo has entered into dark ages.” The second part of the book, 137 pages, is a sheer delight to read. It consists of travelogues and/or letters by Western visitors spanning several centuries and portraying the city and its rich and diverse experience from different angles.

Some of the travelogues deal with the seemingly endless miseries that history has handed out to Aleppo: from earthquakes to droughts and wars among rival powers, some of which were doomed to disappear in the sand of oblivion that is history.

However, the cumulative effect of Mansel’s masterly selection is one of optimism about and hope for Aleppo’s future. It seems that Aleppo has always enjoyed the blessing that Nietzsche coveted: “Whatever doesn’t kill me makes me stronger!”

Many tyrants tried to kill Aleppo and failed. Bashar and the boyars and the mullahs who keep him alive are only the latest.

Aleppo is wounded, deeply wounded, but it is still alive, and fighting back.