Older refugees face major learning issues with new languages in the countries they reside in, but people are unfair to judge them for laziness and a lack of motivation, says linguistics expert 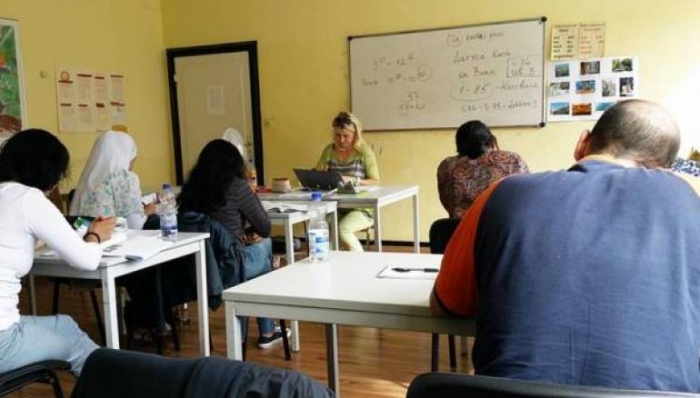 At first glance, the scene appears strange; men and women over 50 years of age, many of whom have adult children, are sitting in school to learn the language of the European country they have chosen to live, after their bellies have grown full, their hair turned white or fallen out.

The scene quickly shifts from comical when you listen to them complain about themselves as they struggle to learn this language without success – their heads filled with worries, no longer able to cope with more than a few light mental activities.

Language is the Biggest Barrier

You barely meet a Syrian family who has sought refuge in Europe without them talking about the difficulties they are facing while attending mandatory language classes. As European countries place new conditions and responsibilities on these families for them and their children, this only adds to the mental pressure that newcomers face, so that language no longer constitutes their major preoccupation. Adnan al-Mouqdad, who has been living in Germany for a year and a half, recounts his experience with language classes as he approaches 50.

“I feel that I am luckier than others because I have learnt enough to manage my own and my family’s issues,” Adnan says, “but even with that I have not succeeded in the language classes, and I have to repeat it after nine months of [attending] school.”

He says the issue is not only related to German being a difficult language, but also returning to study and complying with the attendance is difficult the older one gets, as a human’s ability to concentrate after 40 is very low. “It might not be more than two hours whereas seven hours daily are required which makes a person unable, except to maintain a limited amount of information.”

Yousef al-Homsi, 45, lives in Sweden, away from his family. He says that even now he has only learned vocabulary for welcoming and greetings and some other simple words, although he has completed the language course and is working for a Swedish employer. Yousef spoke of the difficulty he had absorbing the language, which he also attributes to his distance from his wife and children since the family reunification process has not yet finished.

Which Language is Hardest?

Every Syrian believes the language of the European country they are living in is the hardest. They compete between themselves to prove how difficult the language is. But according to experts, every language which differs from one’s mother tongue is difficult, and is unrelated to French, German or Swedish being especially difficult to learn.

Linguistics expert Mohammad al-Salh, who runs an interactive language website which includes programs in English, French and German, said that the older one gets the lower chances of successfully learning a new language. According to Salh, the maximum age a human can fluently learn a language is 10 years old, adding that after this age the child begins to complain about the difficulty of learning a language.

“What then of those wanting to learn language and they have passed 40 or 50 years of age?” Salh asks. “It is very difficult, and at that stage, a human can barely learn some simple vocabulary and even then with bad pronunciation, but he is able to understand and he can learn to read better.”

Salh adds that are there many who believe that the difficulty of learning a language is due to their lack of interaction and communication with native speakers. People believe they can learn languages from their small children, and some see the difficulties as due to the presence of their family and their worries about their children and others, or their distance from their families, he explains. But Salh says the issue is unrelated to any of these circumstances, and the issue is mental in the first degree, as a human being’s ability to learn and memorize after passing 30 years of age is difficult, apart from in exceptional cases.