“Our dollars go to the Central Bank whatever we do; we need the Syrian pound and they need the dollar” 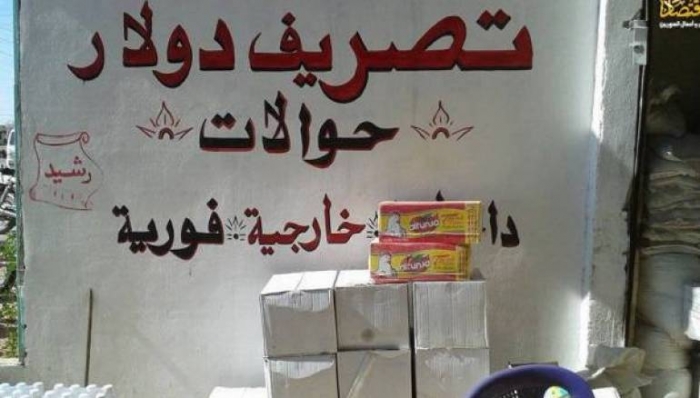 Regardless of how US dollars are spent inside Syria, most of them end up in Syria’s Central Bank. The northern countryside of Homs is considered one of the largest sources of dollars for the Central Bank as around $30,000 from regime areas is exchanged into Syria pounds daily and returned to opposition-held areas.

Currency trader Abdullah Ayoub told Iqtissad, “Our dollars go to the Central Bank whatever we do; we need the Syrian pound and they need the dollar.”

More than four years of siege on the northern countryside has impacted the amount of Syrian pounds entering opposition-held areas where the only source of local currency is from state employees or the sale of harvests. The dollar on the other hand regularly enters in high quantities through the different opposition-run institutions and relief organizations. Many Syrians also exchanged their Syrian pounds into US dollars at the outset of the revolution as the economy started to show signs of instability, according to Rastan local Abou Ibrahim.

At the beginning of June, the dollar exchange rate witnessed massive fluctuation, according to Louay Dehaik, owner of a money exchange office, who added that traders had begun exchanging dollars at their own price. Dehaik explained that the unprecedented fluctuation caused the dollar to dramatically drop from 650 pounds to 450 pounds in a single day, causing panic among traders.

Trading in money is a dangerous job amid the siege, as traders are required to move through barriers carrying thousands of dollars from Homs north to Hama for a better exchange rate, as well as millions of Syrian pounds on their way back, where they are subject to random arrest or abduction.

In Rastan, on the road between Homs and Hama, people recall the story of a man who went missing while carrying thousands of dollars and millions of Syrian pounds. The man was known to work for ‘Sabsabi,’ the largest currency trader in the area, and many think that he was arrested at the barrier of Taqsis near Hama city.

"Necessity is the Mother of Invention"

Currency trading has become widespread and is no longer restricted to exchange offices as malls, petrol stations, jewelry shops, clothes stores and even grocery stores trade in currency, although most work for a few larger trading offices.

“I buy and sell dollars for a money exchange office for an agreed bonus, which brings me good income with less risk,” grocery store owner Mohammed Mansoor explained.