Around 19,000 infants are estimated to require baby milk in Eastern Ghouta, while the monthly cost of milk often reaches up to 39,000 Syrian pounds ($180), which is more than half of most residents' income. 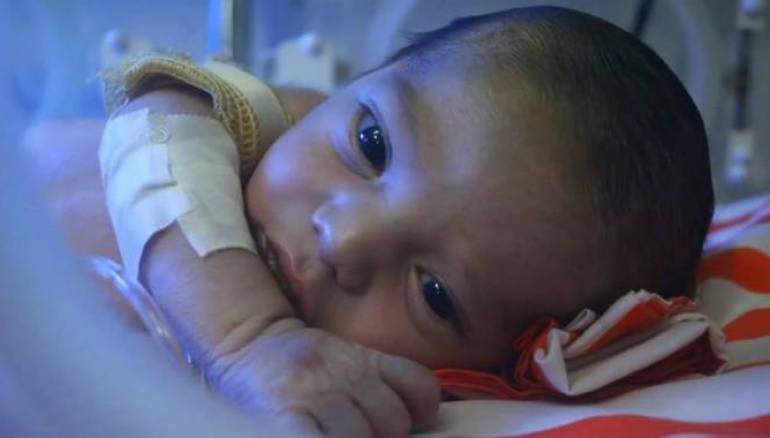 Abou Khalid remembers the harshest days of the blockade with his twins Judi and Taj. Their main source of food was not available after regime forces deployed in the besieged Eastern Ghouta suburbs prevented the entrance of baby milk formula.

What will Abou Khalid do when his two daughters are drained by hunger? Can he find alternatives to end the suffering of these children, who have not yet tasted the bitterness nor sweetness of life?

Abou Khalid says that a lack of nutrition in the mother’s diet due to the siege, coupled with intense stress, resulted in a lack of milk and therefore they were forced to resort to manufactured milk.

Because baby milk was not always available in the market, and when it was it was very expensive, Abou Khalid tried to buy at least one or two cans every week. The cost of milk per month is often as much as 39,000 Syrian pounds ($180), which is more than half of his income.

Abou Khalid adds that he resorts to cooking healthy and light food, like rice or corn, to use it as nutrition in addition to the baby milk.

Around 19,000 infants are estimated to require baby milk in Eastern Ghouta, according to data obtained by Iqtissad.

To address the biggest economic effects resulting from this tragedy, more than a quarter of Ghouta residents pay around half of their income to buy baby milk. Parents are forced to pay around 45 percent of their income to secure milk for their children (in addition to other expenses like diapers and medications). A number of organizations operating under the umbrella of “Relief Work Coordination in Eastern Ghouta” work to secure baby milk for free for the most vulnerable families.

Abou Yaseen, part of the Coordination’s administrative staff, says they were able to gather most of the relief organizations in Ghouta into one committee for joint work on a milk project. The committee aims to coordinate between organizations which distribute milk cans and share data to deliver the material to the largest number of people.

Coordination management has released a report on October 25 warning of the danger regarding securing milk for babies.

To help shed light on the risks we met with Abou Salem, one of the doctors working in the Unified Medical Office for Douma city. He confirmed that breastfeeding is very important for the child in two ways: it is better for the child’s immunity because it strengthens resistance against most illnesses in addition to promoting growth, while it is known that brain development for children who are dependent on breastfeeding is better than others. Psychologically speaking, breastfeeding also strengthens the emotional bond between the mother and the child.

When we asked about the alternatives that can be used, Abou Salem said that they add corn starch to milk, but only after the infant is at least two months old, and only as a nutrition-supporting milk.

In the past few days with the entrance of a UN aid convoy to cities and towns in Eastern Ghouta, regime forces have prevented the entrance of baby milk to most areas except to those towns which already received milk, about 20 percent of infants.

In this bitter reality, it seems that regime forces are content waging war even on infants, who have committed no crime except being born in areas which oppose the regime.