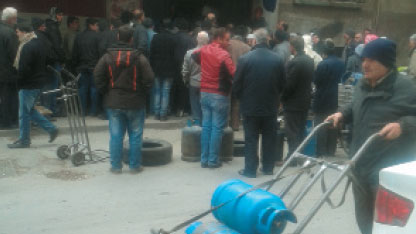 In Damascus, lines of people form each morning as residents wait to obtain gas and water refills amid continuous outages in many areas which have lasted for five days.

In many districts the water currently reaches homes for only an hour or two every three days, while the theft of water has become widespread, as “water thieves” withdraw large amounts of water. Meanwhile, the well water is contaminated and only suitable for washing, and not for drinking, which forces residents to boil water before using it.

A number of residents of the Syrian capital say that water has been cut off since last Friday as they live in districts that are not supported by the backup network.

Meanwhile, residents also complain that gas is currently available on the black market at a price of 5,000 Syrian pounds ($23) per canister.

“Whenever there is an increase in gas prices, we wait and we see cars on the roads waiting for those who come to exchange a canister and ‘beg’,” one resident explained. While government officials in charge of consumer protection confirmed that daily production of gas canisters had increased to 45,000, we did not find this volume available. What we did find, though, is that it was available at prices between 4,000 and 5,000 pounds per canister, and only after extensive negotiations.

Sometimes the price is higher, and this is of course due to the complicity in selling large volumes to monopolists who control it and its price. This problem would not be hard to solve if government agencies were serious about addressing it.

Damascus residents believe that the water would not be difficult to secure provided the state sends water tankers to most areas, although this requires more organization and coordination because it is unorganized and the delivery times are not known.

Regarding the issue of drinking water, the selling points do not have sufficient amounts, while residents find themselves misguided as it was announced that the water would sell at a price of 650 pounds.

However, where is this item when we see it in many stores and stalls being sold for between 900 and 1,000 pounds, oh vendor? They ask: Where are the monitoring agencies and especially those concerned with protecting consumers from these practices and these prices which we must and should see standing alongside the citizen in conditions deemed necessary and emergency? The citizen waits for these agencies to fulfill their true and usual role in conditions like this, while they are oblivious to their duties in many areas. This is in addition to the rising cases of water container theft.

Resident Abou Youssef said: My container was stolen three times and the lock was stripped off. A number of other containers in the building were also emptied of water. The water comes and we are assured that the container is filled and then in the morning we are shocked to see that the lock has been stripped off and it’s been totally emptied of water, to the extent that we are unable to find any solution but putting it on the roof of the building.

Regarding the issue of water, the Damascus province has facilitated roving cars in its districts starting several days ago to mobilize water canisters for citizens.

In this the matter resembles what was done recently for mazut, when officials speaking to to al-Watan rejected claims of a gas crisis but said that shortages were due to extra demand.