Zaman al-Wasl tells the story behind the only possessions of Om Mahmoud, a 50-year-old from Homs, who now resides inside a camp for displaced people after the death of her sons and husband and the destruction of her home 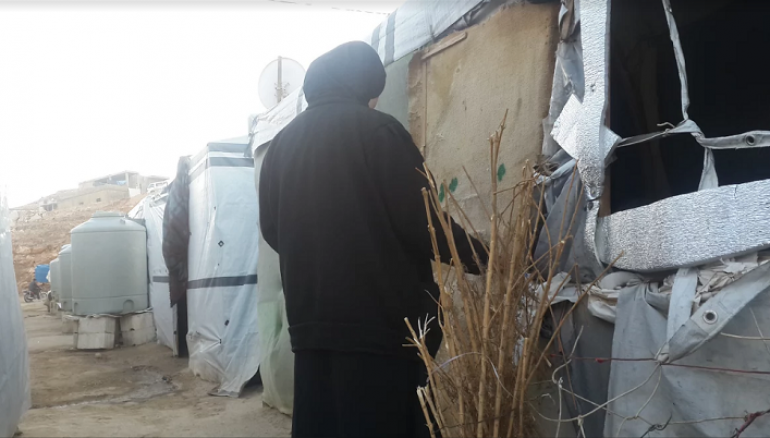 Om Mahmoud recounts the intimate details of her loss and forced migration from Homs' Khaldiyeh neighborhood in 2012 by regime forces and allied militias.

The 50-year-old left behind three graves and a destroyed house in Khaldiyeh for the latest stop in her life, a refugee camp. In her tent, Om Mahmoud keeps a black box filled with memories and objects, and with deep breaths, she reveals the stories behind them.

Her eldest son loved to shell broad beans. He was shot in the head by a sniper as he returned home from a nearby restaurant. Om Mahmoud found some five Syrian pounds in coins in his pocket that she says may have been the change from the restaurant where he paid for his plate of broad beans on that September morning. Her son did not live to taste freedom and broad beans together.

Om Mahmoud keeps the coins she found in his pocket, and they act like a cord connecting her to her martyr son every morning.

In the black box, she keeps her other son’s wedding suit. He never wore the suit, as he was killed by a mortar rocket as he returned home one day from his work in construction. He had almost gathered enough money to pay for the wedding, but he died before he could enter the bond of matrimony. Instead, he entered the graveyard of Tel al-Nasr, a disfigured body.

Her husband, Abu Mahmoud, lost part of his eyesight from sadness over the loss of his two children. He had no means of expressing his love and longing for them other than reading them the Quran from behind thick black tinted medical prescription glasses. He died of a heart attack while his family went in search of a doctor in besieged Khaldiyeh, but they did not find one in time.

Some coins, a wedding suit, and the black tinted medical glasses are the world of Om Mahmoud who opens the door to her memories every morning.

She opens her black box to sit with her departed sons and husband, but before that Om Mahmoud never forgets to bring out the key for her five-bedroom house which was reduced to rubble surrounded by soldiers and tanks. She hangs the key on a nail in the tent wall, and looks upon it as she remembers days past.

The key is not as long nor the same kind as that of the doors of occupied Palestinian homes, but it definitely resembles them.

It stands as evidence of the right to return to a homeland turned into rubble, ruins and the remains of broken doors that await the return of their owners and residents.