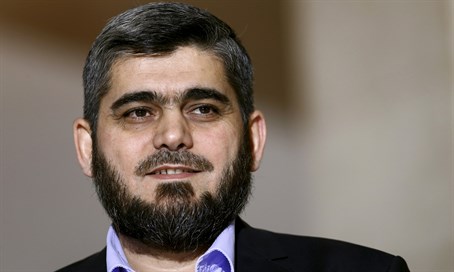 Mohammed Alloush, the head of the Syrian opposition delegation in the Astana conference, said that the political process in Syria starts with the departure of the head of the regime, President Bashar al-Assad, and the ruling junta, and the withdrawal of all militias and foreign forces belonging to Iran, adding that the aim of the current negotiations was to cement the ceasefire.

In the speech which he delivered at the opening of the conference, Alloush listed three aims of the current negotiations being held in Kazakhstan’s capital: to cement the ceasefire, to freeze military operations in all parts of Syria, and to implement humanitarian measures which were approved by the UN Security Council.

Alloush said that these three steps would be “a strong card toward the desired political transition in Syria, in accordance with the Geneva 2012 statement.” He said that the aim of the groups at the negotiations was not to divide power or to look for influence but rather “to restore security to Syria and release male and female prisoners.”

He added that the presence of foreign militias brought by Iran and manufactured by the regime — with the terrorist Lebanese group Hezbollah at the forefront — or the Kurdish Democratic Union Party, was contributing to the continuing bloodshed and was no different from the terrorist Islamic State group.

Alloush said that “there are more than 13,000 women jailed in the Syrian regime’s prisons, arrested arbitrarily without any trials or any crime.” He said that, “Syrian opposition forces were trying seriously to achieve the aspirations of the Syrian people for a free, dignified life in which justice and the rule of law prevail, without tyranny or oppression.”

In his speech, Alloush stressed the need for there to be international efforts to remove the militias supported by Iran which were fighting in Syria, saying that the presence of these militias alongside the regime was contributing to the continued bloodshed in Syria.