Home to hundreds of archeological sites, rebel-held Idelb's historical artifacts have seen the full effects of corruption, looting and deliberate bombardment over the past six years, as those antiquities that aren't destroyed are gobbled up by an eager international black market, Hussein Abdullah writes 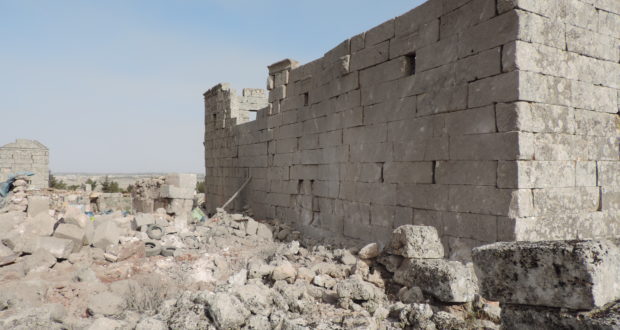 Idleb province contains about a third of Syria’s ancient ruins with a number of important archaeological sites dating back to 5,000 BC. The successive eras of the region’s historical cultures included the Hittite, Aramaic, Assyrian, Greek, Roman, Byzantine, and then the stages of Islamic rule in their various eras, including Umayyad and then Abbasid, and those which followed.

The province includes about 400 archaeological sites known as the forgotten cities because of the intentional and systematic neglect of this region by the Syrian regime throughout the period of its rule. The most famous of these sites is the city of Ebla, which was excavated over a 10-year period by an Italian mission in 1964.

It also contains other ancient cities such as Shinsharah and Bara and the Qalb Loze church, as well as many other sites spread throughout the province — not to mention some 200 archeological hills in the province which the Syrian regime did not work to excavate or discover, according to researchers.

In light of the war raging in Syria between regime and opposition forces, the antiquities of Idleb have experienced a heavy share of the damage resulting from a number of war-related causes.

Regime forces with warplanes and artillery have targeted the archeological sites repeatedly, systematically and deliberately since the start of military operations, as warplanes have used rockets or helicopters with barrel bombs which are dropped from the aircraft in indiscriminate attacks, which has resulted in the destruction of a number of these sites, their disfigurement, and some of them even flattened to the ground.

As recently as a year ago, Russian aircraft have joined the lineup, hitting the archeological sites since the start of their air operations in Syria.

Tamil al-Moussa from the village of Hass, near the Shinsharah ruins says that “when regime forces were in Wadi Deif and Hamidiyah they used heavy artillery and rockets to shell the Shinsharh ruins repeatedly. During an attack on the place, these forces were stationed by the rebels and the displacement of some of the people of the area who took shelter in the ruins, the regime aircraft deliberately targeted the displaced people with barrel bombs and exploding rockets, which caused them to be displaced again. However this did not alter the change as the Assad and Russian warplanes continued to target the people deliberately, and sometimes with repeated raids during the daytime.”

Mohamed al-Mustafa, from the town of Kafrouma, says: “Regime forces in Wadi Deif and Hamidiyah completely wiped out the palace adjacent to Kafrouma through continuous artillery shelling which deliberately destroyed the site.”

In light of the security collapse the liberated regions are enduring, including in Idleb and its countryside, the phenomenon of the arbitrary excavation of antiquities by local residents or some opposition military groups with the aim of selling the antiquities has been witnessed.

Samir, who is interested in antiquities, from the village of Bara, which is in one of the richest Syrian areas in terms of antiquities, and which is surrounded on all sides by important antiquities sites such as Rabia, Serjilla, Beshla, and Batrasa, said: “After the security collapse in the area and the absence of people to monitor the antiquities, random excavation began to spread in the region and antiquity traders began to connect with traders abroad who bought what they found in their excavations, such as small statues, and archaeological finds including gold, sculptures or pottery, and so on, which are sold for dollars at low prices and are all smuggled by the trader abroad to be sold in black markets at high prices.”

Ahmed, from the town of Hazerein, spoke extensively about the ancient site of Tel Hazerein which goes back to the Aramaic era and which has today been transformed into a beehive of holes dug for random excavation, which have destroyed the site and its historical and archeological identity.

The Idleb museum is one of the most important museums in Syria and the world because of the nature of the finds and discoveries, including sculptures, pottery, glassworks and statues as well as the archives of the Kingdom of Ebla which includes thousands of mud inscriptions. The regime intentionally emptied it and smuggled all the important discoveries out of the museum, leaving only a few simple and insignificant works before leaving the city of Idleb and handing it over to opposition forces. It then intentionally bombarded the area repeatedly to cover up the crime of looting the museum which was carried out by high-level officers.

Saad — a nickname — was one of those who previously worked at the museum. He said: “Recently and during the control of Assad’s forces over the city, the national museum in Idleb was a valuable catch for officers and fighters from the regime forces.” He continued: “We saw some military vans covered in a tarp stop in front of the museum and then some of the fighters and individuals from Assad’s forces carried out some things inside cartons and placed them in the cars without allowing anyone to come close or even stop in the area. Then we later learned that the regime had stolen important artifacts from the museum.”

Another museum which won a share of the destruction and is no less important than the Idleb museum, and perhaps more important, is the museum of Maarat al-Nouman, one of the most important mosaic museums in the world. The site was bombed repeatedly with barrel bombs which destroyed a portion of the historical building and damaged many of the priceless works.

What little of the province’s artifacts have survived the bombardment, smuggling, trafficking and looting are waiting for opposition forces which control them to take up responsibility with neighboring countries — which fail to seriously pursue smuggling operations. Laws need to be enacted and penalties imposed on all those who have been proven to be involved in random excavation or smuggling of any artifact — the neighboring countries at the only group able to end this historical bleeding and systematic loss of the province’s archeological identity.