Zaman al-Wasl speaks to recently evacuated people from the Al-Waer district in Homs who have been sent, along with thousands of others, to northern Syria without humanitarian aid, a place to live or work to survive 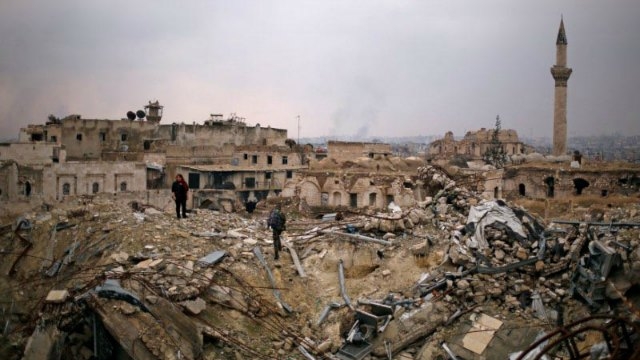 The Assad regime and Iran are succeeding in their plans to change the demography of Homs province, as more people of Al-Waer neighborhood are transported to northern Syria in weekly batches.

The opposition is yet to institute any plans to accommodate the newly displaced as thousands of families from Homs place strain on the resources and infrastructure in the newly settled areas.

Zaman al-Wasl met with the evacuees of Al-Waer in the city of Al-Bab in Aleppo province.

Like other areas in Syria’s north which have settled displaced, these evacuees face an unfamiliar new city and an uncertain future as they struggle to deal with their displacement from one of the last revolutionary strongholds in Homs.

Speaking to a group of displaced, one young man said: “It has been two days since we arrived in the city of Al-Bab. We were facing the unknown. We have found nothing for us but these already destroyed streets … There is no money, no home and no work to be found in the city.”

He added: “We do not know when we will be given the authorization to leave the city … Now we are battling with a new life here, and perhaps carrying arms is easier than this battle, especially as we know no one in this city. We are confronting the unknown.”

When asked if they would consider joining one of the armed factions, the response was: “We will not repeat that experience … We carried weapons in Homs and they let us down.”

The young men called on the Syrian National Coalition and the opposition in Syria to intervene to solve the problem of shelter for the newly arrived families, which include many women and children. Many of the newly arrived cannot afford the price of rent in Al-Bab, where monthly rent for an apartment can reach $100.

The displaced people of Al-Waer are dispersed across Syria without assistance or support from humanitarian or relief organizations or the political opposition. This disaster will continue and grow as more displaced people arrive from the neighborhood to camps and cities in Syria’s north.