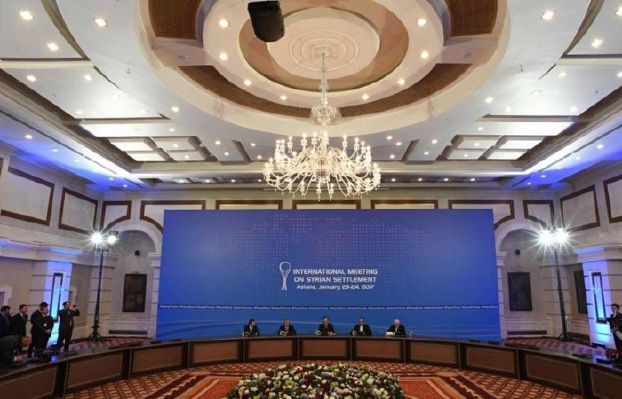 Optimistic expectations prevailed on the first day of the Astana 4 negotiations following the signing of an agreement on establishing de-escalation zones inside Syria, despite the rebel delegation’s announcement to suspend its participation fearing continued targeting of opposition areas by regime and Russian warplanes.

The participating delegations held a series of bilateral meetings aiming to crystallize a single position around the Russian proposals presented to the negotiators, amid expectations of the announcement to consolidate the ceasefire and approve four safe zones and develop mechanisms to separate warring parties.

Despite its contents remaining private, the widely-circulated Russian document was the basic focus in the first sessions of the negotiations. The Moscow delegation in Astana presented it in bilateral meetings held with the Americans and with fellow ceasefire guarantors, Iran and Turkey, while their discussions concluded within a meeting bringing together the Russians with the international envoy Staffan de Mistura.

The first day of the negotiations was distinguished by active bilateral meetings that aimed to bring together the contrasting positions. The Russian delegation, headed by the president’s envoy to the Middle East, Alexander Lavrentyev, met the US Assistant Secretary of State for Near Eastern Affairs, Stuart Jones, in the first communication bringing together the two sides after a phone conversation between President Vladimir Putin and his American counterpart Donald Trump on Tuesday-Wednesday night, in which the two sides agreed to pursue communications around Syria on a number of levels.

Jones declared his hope that the negotiations would be successful and said that the Americans’ initial focus in the talks was on the issue of reducing tension. Responding to a question about whether his attendance at Astana heralded the beginning of real cooperation between Moscow and Washington in resolving the Syrian crisis, the American diplomat said that his country’s delegation was there in an observer capacity and noted that there were plans to hold consultations with his Turkish counterpart.

The Russian Sputnik news agency quoted one of the negotiators as expecting a boost thanks to the Russian initiative leading to a de-escalation, saying that it was “an idea that appeals to everyone. We have done preparatory work, and we hope that we will reach an agreement on this document on the level of the guarantor countries.”

Yahya al-Aridi, adviser to the opposition High Negotiations Committee, said that the committee was studying the Russian proposals and was “working to fully understand its substance.”

Al-Hayat obtained a copy of the document presented by the opposition which blamed the Syrian government and Iran for not complying with a ceasefire, while criticizing Russia’s position of “backing the regime.” It also included an agreement on the proposal of safe zones, but considered it a temporary measure to reduce the suffering of refugees and one that could not be an alternative to a political transition.

The opposition document included 10 demands, including:

1. The regime and the forces backing it comply with the cessation of attacks from government land and air forces against areas under the control of opposition groups.
2. Withdrawal from the areas which the regime seized after the truce deal entered into effect on December 30, including Wadi Barada, the Al-Waer district, Moadhamiya, and Zabadani, and facilitating the return of displaced people to these areas.
3. A start to the release of all prisoners from prisons in accordance with a timeframe and the immediate release of women, children, elderly and the sick.
4. The delivery of humanitarian aid without restriction or conditions to besieged areas, such as Mahajjah in Daraa and the Ghouta in the Damascus countryside and Al-Waer district in Homs, and to the northern Homs countryside, and likewise to Barzeh and Qaboun and Madaya and southern Damascus and Deir-ez-Zor.
5. The departure of all militias loyal to Iran from Syria through decisive and effective steps.
6. Compensation from Syrian authorities to those harmed and the introduction of punitive criminal deterrent measures against all those who carry out breaches of the ceasefire, based on the items of the messages of the guarantors to the ceasefire, Russia and Turkey, deposited with the UN Security Council.
7. Employ observation mechanisms to guarantee the full implementation of the ceasefire and prevent any subsequent breaches.
8. Confirm that any solution or truce in Syria will begin in parallel with the principle of a political solution and preserving the unity of Syria, in terms of land and people, and rejecting projects which pave the way for effective or legal partition. The safe zones are a temporary measure to reduce the difficult humanitarian situation of civilians, and it is not possible to accept any alternative to a political transition.
9. Eliminating terrorism requires fighting its causes manifested in the survival of the regime. In order to consolidate the efforts of Syrians against terrorism, tyranny must be ended and in order for millions of Syrians to return to their homes, Bashar al-Assad must go.
10. Iran is an enemy state to the Syrian people and it is part of the problem. There is no role for Iran in Syria’s present or future as a guarantor or sponsor.