Education directorate says teaching Russian will help bolster the educational system due to the language's prominence on the internet, loyalist newspaper Al-Watan writes 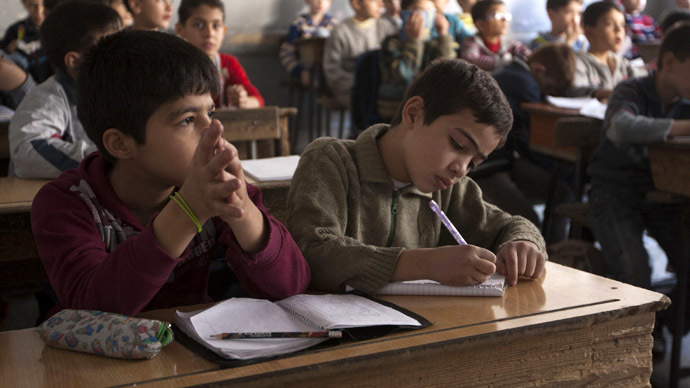 The Russian language has become optional in the schools of Daraa, but remains limited due to the lack of qualified educational staff.

Despite this, the Education Directorate of the southern province has provided the necessities for studying the Russian language, which is easy to learn and is no less important than others, as it is a language of science, knowledge and peace.

The general coordinator of the Education Directorate, Awad al-Asfar, pointed out that this language had been added to the curriculum by the Education Ministry as an experimental language in the 2014-2015 school year, beginning with the seventh grade. The decision to teach it will aid the development of the educational system, he said, adding that Russian helps expand the sources of knowledge for the student due to its prominence on the internet.

The number of schools in which Russian is currently studied has grown to six in the city of Daraa and two in the town of Izra, and at the end of the current school year the first batch of about 160 students will advance to receive basic educational certificates with the Russian language.

Asfar said that 450 students enrolled in basic education are currently learning Russian in integrated curriculums approved by the Education Ministry for the seventh, eighth and ninth grades. The response from students has been good despite a lack of staff who can help pupils solve exercises and understand language rules, as is the case with English and French.

Asfar pointed to the possibility of including visits to Russia for top students and their teachers from all provinces in order to encourage them and familiarize them with the Russian environment.

He also noted that if there was more staff, Russian could be taught in other cities and villages in the hopes of improving the low wages for teaching, which are about 150 Syrian pounds per hour.