The enforcement of the Kurdish curriculum in northern classrooms has led to a rise in ethnic tensions and a large number of dropouts, Sada al-Sham writes 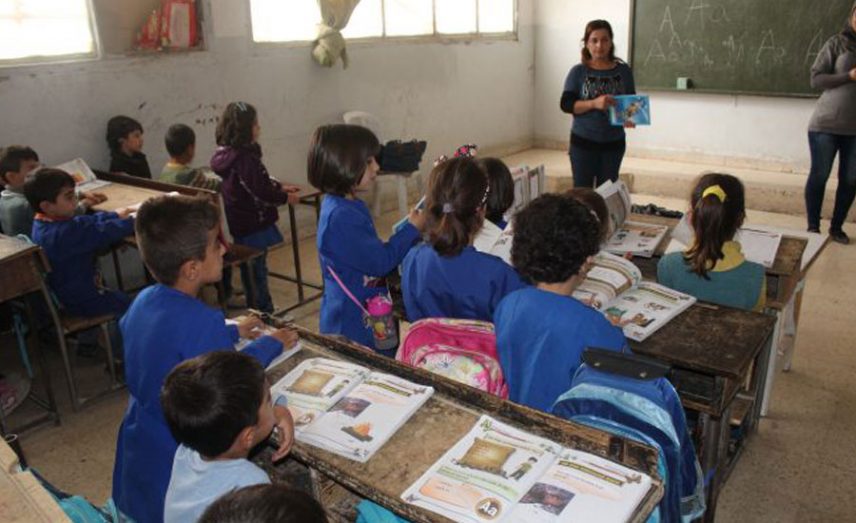 As the new school year enters its second week, the father Mithqal Assi al-Jarba is haunted by the anxiety he will not be able to enroll his five children in the private school in the town of Malakiya in northern Syria.

Jarba, a man in his 40s who lives in the Al-Jazira area, is used to moving with the start of each new school year to the city of Malakiya so his children can continue their studies in Arabic. The children attend a private school overseen by Armenians and Syriac Christians after the Self-Administration required all government schools to teach the Kurdish curriculum.

However, unlike previous years, Jarba has not been able to secure a house to rent in Malakiya after homeowners there were forbidden from renting to Arabs under the pretext of “Kurds first.”

“I have not yet been able to find a house to rent and the landlords refuse to rent to an Arab,” Jarba told Sada al-Sham, continuing: “I don’t know where I will go with my five children. I can’t send them to school in the village where I am because they teach the Kurdish curriculum, which isn’t recognized either locally, regionally or internationally.”

With the start of the current school year, the Self-Administration required preparatory government schools in areas they control to teach the Kurdish curriculum, a step expanding the scope of implementing the curriculum which it imposed on primary schools in 2015.

Residents of districts of the city of Hassakeh categorically rejected that, and organized protests and demonstrations, which the Self-Administration responded to by arresting participants.

Head of the news website Al-Khabour Ibrahim al-Habash said that the schools in Hassakeh's districts under Self-Administration control were still closed after residents refused to send their children.

Habash told Sada al-Sham that the Self-Administration had recently mobilized patrols by Asayish security forces around all schools under their control in the city of Hassakeh and its western and southern countrysides, to inform residents that the schools would not open unless they accept the Kurdish curriculum.

“However, residents did not send their children to these schools and so the rate of school dropouts will increase,” he said. “Residents categorically rejected these curriculums.”

Habash believes that the Kurdish authority's terror tactics will not succeed in forcing residents to accept this fact, saying that the Self-Administration was delivering its instructions to residents through Asayish patrols and not through their own education directorate.

The regime and the People’s Protection Units (YPG, the armed wing of the Kurdish Democratic Union Party) share control over the center of Hassakeh city, with the latter controlling the whole provincial countryside.

The Assad regime imposes the official curriculum in areas under its control, or the so-called “security square,” but these schools are still limited in number and are unable to absorb all the Arab students from the province and its countryside.

In addition to the security square, the Christian private schools in Self-Administration areas have continued to teach the regime curriculum, which increased demand from residents to the extent that their classrooms are unable to absorb the increase in Arab students.

But even these schools have not been spared the laws of the Self-Administration, which require them to not accept new Kurdish or Arab students from non-Christian faiths, in exchange for allowing older students to continue their education.

These schools take symbolic fees from students, which are not more than 20,000 Syrian pounds per year.

In light of all the above, residents lack alternatives, which has led to an increase in the rate of school dropouts in a province suffering from a spread of this phenomenon.

These difficult conditions have pushed a large segment of residents from Hassakeh and its countryside to prefer that their children stay home rather than send them to schools.

Commenting on this, political activist Mahmoud al-Madi said that most Arab students were out of school, and that residents were fully convinced that there was no use in their children studying these ideological curriculums, which had exchanged the statements of the Assad family with those of Kurdish leader Abdullah Ocalan.

Madi expressed his regret at this tragic situation which had afflicted residents of Hassakeh province, pointing to how even most Kurds had rejected these curriculums “because they are illegal and acknowledge by no one,” as he put it.

The activist added that “the future of Hassakeh's residents has been cast to the wind, and the Self-Administration is set on this arbitrary policy despite appeals from residents and organizations concerned with this issue."

He concluded by saying: “There is no hope for the parents of students except to hope that some group enters to resolve this dilemma, which threatens an entire generation to be lost and drowned in shadows of ignorance.”