Authorities in the capital downplay size of displacement issue in interview to loyalist Al-Watan, claiming widespread fraud had taken place due to incompetence of aid organizations 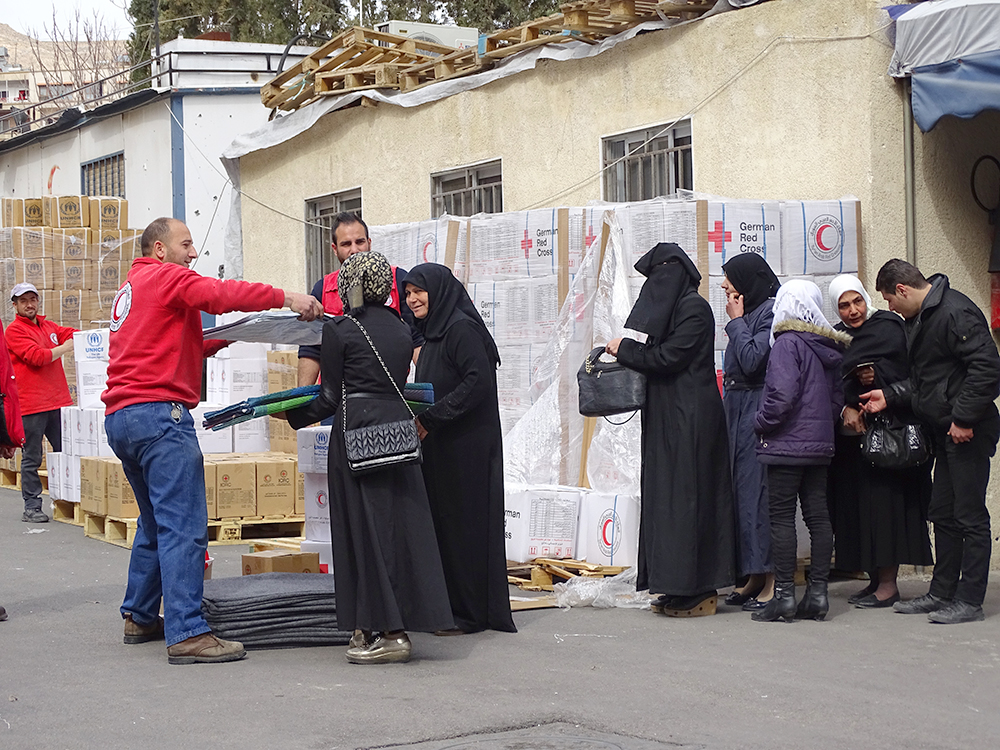 The secretary of the subcommittee for relief in Damascus, Marzat Abboud, has confirmed the presence of just 92,000 displaced families within the administrative area, out of more than 299,000 that had been registered in the relief tables in the city through 62 aid organizations connected with the relief work.

Abboud told Al-Watan that the crowding at the relief subcommittee’s office in the governorate building is composed of groups affected by the audit initiated by the subcommittee during the aid distribution process. The subcommittee ruled over a year ago that all registered citizens in the aid program, whether with the charities or with relief points directly under the subcommittee’s authority, were required to confirm the information provided in their files with the aid organization which was delivering them assistance.

“For more than a year we have been stressing to the groups the need to confirm this information, but the response rate was very limited. The argument was that pressure to work to register new names does not help those in charge of the efforts to set up data confirmation processes and other times they claimed that the citizens did not respond,” she added.

Abboud explained the lack of beneficiary data, saying that half of those working in these organizations have registered thousands of citizens in their records and now no longer work for these associations, and that those who registered then take the aid baskets.

“This has recently forced us to stop benefits for every registered person, whether in the associations or in the subcommittee relief points, if their data is not renewed,” she said.

“This has angered the ‘bad’ organizations, and they have incited citizens by claiming the governorate is the one who stopped the distribution process.”

She said that these organizations refuse to receive even the citizens who have renewed their data, instead sending them to the governorate to create uproar and pressure the subcommittee to re-grant the organization the relief without renewing the data. “As evidence, we have renewed data for citizens and then find them two days later coming back to the governorate, and when we ask them the reason, they say that the association returned them on the pretext that they have not renewed the data,” she said.

Abboud confirmed that a timeframe had been developed for every governorate, but that citizens had not adhered to these dates. She said that citizens from outside the specified sector have been found gathering before the subcommittee rooms, demanding to receive their registration documents in order to renew their data, arguing that they were forced to register and have no time to come back again.

The secretary revealed that a number of citizens had been caught placing money inside their documents as a “bribe.”

“We return them and threaten to ban everyone who hands us documents with money. Then an hour later, we found 1,500 Syrian pounds in the family book of one of the women. The question is that if she has money to pay this bribe and paid more than that in transport, then she does not need the relief basket.”

Abdoud said that thousands of families had returned to their areas that were liberated or had left the country or relocated to new areas, meaning that they are no longer within the limits of Damascus and so have no right to be registered in the aid program. She said that some of them may come from another province every two months to collect the basket.

“Most of those who take them are from the associations which have registered them and know that they did not return to the province, in addition to the fact that there are provinces that do not document distributions and do not seal the books, and therefore a person can benefit from more than one location at a time. The aim is to control this through the data confirmation process and completing the documents for every family according to priority, whereby the first to benefit are displaced families who have lost the breadwinner, and widows and the families which include disabled or chronically ill members.”

Abboud pointed to the presence of 25 volunteers with the committee who volunteered to offer their daily services, collecting documents and referencing the data from all citizens. The issue is then handed to the accountant to reactivate the name of the citizen, in the event that the information is complete, or the beneficiary is asked to complete some missing forms.