Despite their simplicity, projects offer a source of income for many people who have lost their jobs or their breadwinner, Souriatna writes 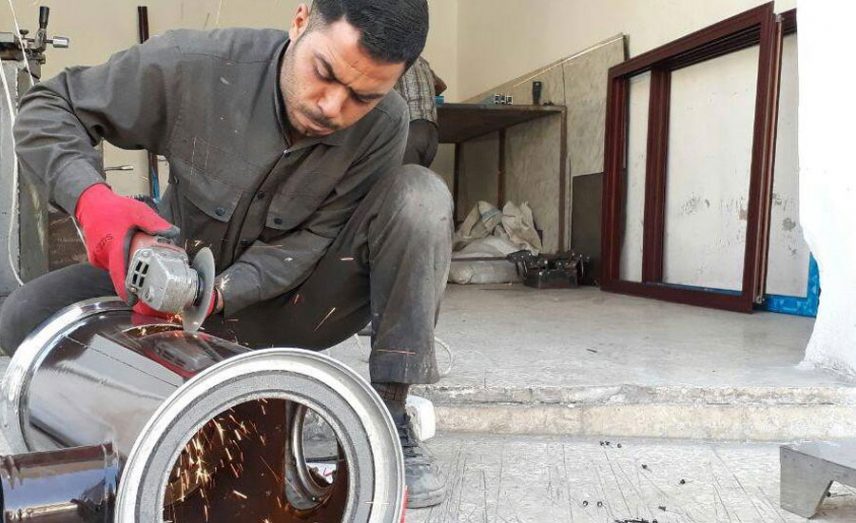 Many small business projects have begun to spread in liberated areas as locals attempt to overcome their difficult conditions. Through offering training in specific fields, a number of associations and organizations have assisted in developing skills and kick-starting projects.

Umm Ahmed, an untrained mother of four from the northern countryside of Homs, was one of those who overcame her bitter circumstances after suffering a major shock with the death of her husband. A year ago, Umm Ahmed hurried to join a training course after she heard about an association in her area which trains women in sewing. After completing the program, she was awarded a stipend which allowed her to buy a sewing machine.

“I was able, after mastering the profession, to open a small sewing workshop, and to recycle clothes,” Umm Ahmed told Souriatna, adding: “While currently I’m working to expand the workshop after demand increased given the low manufacturing and repair costs, and especially given that most of my work is limited to recycling used clothes."

She said her work consists of making large clothes smaller, or making them into small clothes, while sometimes she expands old clothes or patches torn pieces.

Mohamad al-Hasnou, a resident of the southern countryside of Hama, has a project raising chickens — conveniently in line with his rural life. He participated in founding the project with a number of people in order to secure a source of income, based on simple tools and benefiting from the experience of previous projects in the area.

“I saw the egg-hatching process on YouTube but the tools and equipment which it required were beyond my capacities, and so I worked to implement it by using simple and damaged items,” Hasnou explained.

He said he used a damaged refrigerator and transformed it into a hatchery by putting eggs inside it and providing the refrigerator with the necessary heat through red lamps.

The local markets are the sole source of income for Hasnou, who explained: “We sell a small chick for 200 Syrian pounds, and the larger for 700 pounds. The largest chick is 1,200 pounds, while a chicken ready to give eggs in its season is 2,000 and a rooster is 1,500 pounds.”

Warmth at a low cost

In the northern countryside of Hama, Emad Abou Mohamad’s workshop to manufacture fire heaters which run on pistachio shells has become famous. The project has received major attention in his area and the countryside of Idleb due to the availability of Aleppo pistachio shells, which have now become a source of warmth for many families. Demand for his business has increased ahead of the winter, especially in light of the high price of fuel, which is now 250 pounds for a liter of mazot.

Abou Mohamad descried the concept saying: “They are a type of traditional heater, with a box to store pistachio shells added alongside. The box is connected to the heater in a channel that can open or close according to the time. The person can set it up to regulate the length of time the channel can be opened each time to bring in pistachio shells from the box to the heater to be burned. The time period works through a 12-volt battery.”

The prices of these heaters vary according to the type of box used to manufacture them, with ones made of steel 65,000 pounds, while those of aluminum are 55,000 pounds and those made of zinc are sold at 45,000 pounds.

“The pistachio heater is economical, as one family needs 1 ton of pistachio shells to use it for the whole winter, and the price of these Aleppo pistachio shells is about $150. This is cheaper than a barrel of mazot,” Adnan Diyab, a resident of Murak, said.

Abdel Rizak al-Hamdou moves in his car among villages in the southern countryside of Hama and northern Homs to make a living. Hamdou has transformed his small car into a mobile shop and depends on stopping in markets and near schools to sell his goods, which include a number of types of food and household goods, as well as children’s toys.

Speaking to Souriatna, Hamdou says: “Previously my car was used to transport goods and carry furniture. As a result of the siege on the area and the lack of commercial traffic and the displacement of residents, I thought of a project to help me benefit from my car as a source of income. For that reason I turned my car into a small shop, equipping it with a large metal box with shelves where I put my goods, and move between villages.”

Hamdou’s idea has been popular among the people, while it has secured work for himself in an area where it is hard to find opportunities. Many residents of the area have followed his lead, with one designing a car with three cupboards and turning it into a mobile accessories shop, while another local put a box on his motorcycle and used it to sell children’s toys.

Hamdou’s project has cost him about 250,000 pounds between the price of goods and preparing the car, while the mobile car with three cabinets cost about 100,000 pounds and the goods were worth 25,000 pounds. The motorcycle was the least expensive project and has goods worth 15,000 pounds.