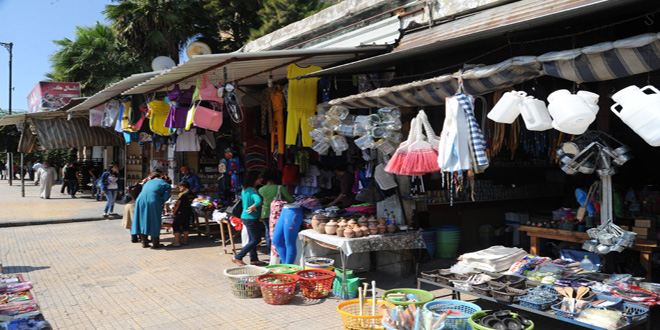 Residents from the coastal Lattakia province are suffering from a deviation in the prices of goods, especially fruits, vegetables, cheese and even clothes.

Between one store and another you can find a contrast in prices which in some cases exceeds 50 to 100 Syrian pounds for foodstuffs, while the difference in clothing can exceed thousands of pounds, as some residents explained to Al-Watan. They said that the common justification from sellers is the fluctuation of the exchange rate of the dollar to the Syrian pound as well as tax differences.

One woman told Al-Watan that she had found major differences in the prices of fruits between the place where she lived in Al-Datour and where she worked on Bint al-Shawish Street — an agricultural area — with a kilogram of apples, for example, costing 100 Syrian pounds more on Bint al-Shawish.

She said: "People have gotten used to the area determining high prices for goods. From food to clothing, all of them are priced according to the place where they are sold."

The woman noted that the price of regular pajamas in the Al-Ziraa area was more than 9,000 Syrian pounds, while the same pajamas are sold in the Al-Anaba market, also known as “the poor’s market,” for 3,500 pounds. She questioned the reason behind this, for which the people of Lattakia have found no logical explanation for years.

An official source in the Internal Trade and Consumer Protection Directorate in Lattakia told Al-Watan that the markets were monitored in the province and work was being done to regulate them. This included daily patrols in addition to deployment of auditors in following up on all sales there.

The source said that necessary actions are taken against any violator, adding that with regards to foodstuffs, about 60 infringement notices had been made recently for not advertising prices and selling at excessive prices.

Regarding non-food items, the source said that 100 infringement notices had been issued during a single month, including 30 for not having bills, 51 violations for not advertising prices, and 10 for not setting the cost of clothing, while others were issued for selling at excessive prices and lack of specifications.