Enab Baladi explores the luxury developments being pursued around Damascus, detailing who looks set to benefit 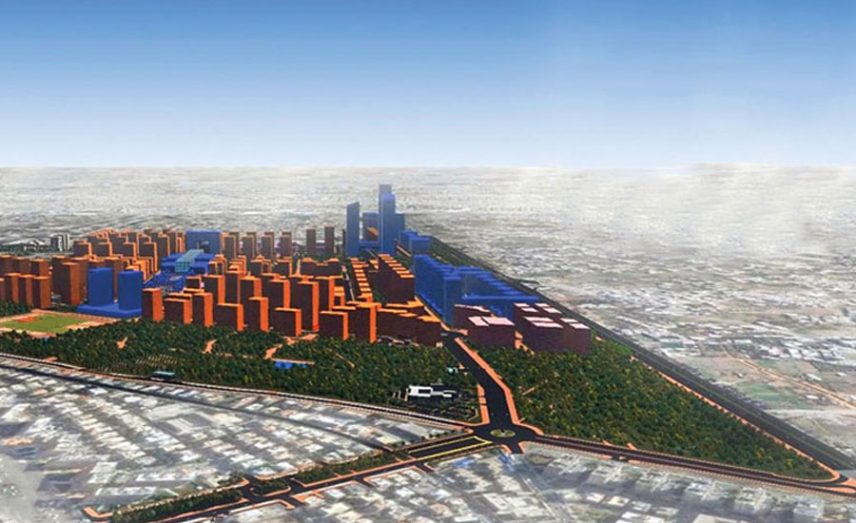 Businessmen in Syria close to the regime and representing regional countries have begun looking for a foothold in reconstruction, by searching for a share for themselves in the development organizations expected to be established in the capital Damascus and its suburbs, establishing new companies with the primary aim of investing in these organizations.

Marouta City, which in the Syriac language means “sovereignty and nation,” and Basiliya City, which means “the council,” are two names for the cities which the regime is working to establish in Damascus, the first in the Khalaf al-Razi area and Basatin al-Mezzeh informal settlements, while the second extends from the south circle to Al-Qadam, Asali and Talateen Street, currently under the control of the Islamic State (ISIS) group.

“The Damascus dream” or “the new city which will contribute to a new dawn for Damascus on the modern world map” are two descriptions given to the Marouta City project on which work has begun in Damascus province, in a precedent which is the first of its kind in Syria, unlike a number of development projects frozen for reasons tied to politics and the reconstruction issue and their attempt to launch before reaching a political solution ending the years-long war.

Obedience and loyalty are standards for selecting investors

Discussion about the form of the development's organization and plans in the Al-Razi area have occupied great space in local and Arab media over the last few months, considering that work began there at the end of 2017.

The Marouta City project is the anchor of a deal for new companies and businessmen whose names have become prominent on the Syrian economic stage recently, amid many questions about the source of their money.

The beginning was with the Damascus governorate’s launch in 2016 of the “Damascus Holding” company, with a capital of 60 billion Syrian pounds, in order to implement the project in the Basatin Khalaf al-Razi area, with tasks including signing deals with participants and other companies to invest in the area.

A new, more important coalition formed in October 2017 to establish the Damascus Joint Stock Security Company, with a capital of $18.9 million between three companies – Damascus Holding, Damascus Joint Stock Security Holding Company, which was founded in March 2017 with a capital of 600 million Syrian pounds and belongs to Samer, Zuhair and Amer Fawz, and the Fawz Commercial Company, which belongs to businessman Samer Fawz and was established in 1988.

The investment value of Damascus Joint Stock Security Company in the project is 150 billion Syrian pounds, allowing for investment in three towers on a roughly 200,000 square meter area, with heights of between 50 and 70 stories, in addition to investment in five residential sectors in a modern development style with an area of up to 43,000 square meters.

According to the Damascus Holding website, these towers will be among the most important urban landmarks for the city of Damascus and a milestone in the city’s urban landscape.

The second name which has become prominent in the new city is businessman Mazen al-Tarazi, who signed with the company a contract to invest in the central mall in Marouta City, with an area of 120,000 square meters at a value of 108 billion Syrian pounds, and establish six additional investment buildings, with an area of 26,000 square meters, selling five sections in the city with a value of up to $70 million.

After questions about the absence of the top investor in Syria, Rami Makhlouf, regime President Bashar al-Assad’s cousin, from the project, he began to invest in Marouta City last week through the establishment of the Rawafid Damascus Joint Stock, with a capital of 25.9 billion Syrian pounds between Damascus Holding, which is in charge of zoning the area, and four companies, including Ramac Projects, which Makhlouf also owns.

The names helped confirm the premise that any investor must pass through the regime’s economic circles and obtain a green light to allow them to enter the “dream city,” as it is called.

Economic researcher Yours al-Karim told Enab Baladi that the volume of businessmen’s investment in the project was set by the extent of their international relations and contacts with other businessmen as well, plus the amount of money needed for the project, with the ceiling of funds not exceeding half or three quarters of the volume of the project.

Karim said that investors needed to bring money from abroad to support the project, given that the regime did not allow anyone to invest unless there was a value in the businessman’s relations with some country or another, adding that the standards used to select the businessman to participate in these projects were: obedience, loyalty and relationship with these countries.

No benefit for citizens

The question which citizens are asking, especially residents of the capital, revolves around the benefit that these projects will produce, particularly given that the government has repeatedly announced that Damascus will transform into a high level of luxury.

Karim said that Marouta City was a project not allocated for Syrians, but for a wealthy class from Arab states who have no problem in concluding transactions outside the limits of monitoring, especially with the internationally imposed sanctions on Assad.

It is expected that these projects will attract the world’s gangs, mafias and corrupt leaders, to make them a safe haven for their money in exchange for the regime receiving their material and logistical support and a portion of their money.

The new city will also raise the prices of rents in surrounding areas given that they are close to a luxury area, in addition to raising the prices of basic goods as it is a first-class luxury area.