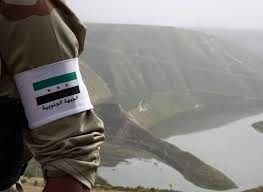 After military operations concluded in Damascus and its environs, Syrian army units have begun to move south toward Daraa and Quneitra. Elite military commanders in the Syrian army and reconnaissance units from allied forces have headed there to identify locations to launch operations against terrorist organizations in the area, starting from Quneitra, before moving onto Daraa, which is a strategic center. The Nasib Border Crossing with Jordan is located in Daraa and serves as the gateway that connects Jordan and countries in the Gulf with the Mediterranean.

The Syrian army has recently depended on fierce military operations that have forced terrorists out of occupied areas and into northern Syria and have then cleansed each area, one town after another. The Syrian army has been able to secure the international Homs-Damascus road in Harasta and Douma, and the relevant authorities opened it after declaring victory in eastern Ghouta. Authorities are also working to prepare the Hama-Homs highway in the al-Rastan area, in the northern Homs countryside and southern Hama countryside, which were recently declared free of terrorists. Several sources have also announced a Russian-Turkish-Iranian deal that is being struck to secure the Aleppo-Damascus international highway in Idleb, that will push terrorists back 10 km on either side of the road.

Syrian forces have been preparing themselves by taking part in various battles; from Palmyra, Aleppo and up to the countrysides of Hama and Homs and finally into eastern Ghouta. The Quneitra and Daraa provinces are also witnessing modern and sophisticated preparations. Syrian forces will have everything necessary to entirely defeat the terrorists south of Damascus and return these areas to the control of the Syrian state.

Before the Syrian army begins operations, American officials have repeatedly come out to warn the Syrian leadership against any attack on terrorist militias under their authority. These US threats began with Qusair and were followed with threat regarding western Qalamoun, Aleppo, Hama, and eastern Ghouta. There have been many other threats made, although these quickly dissipate into the air after the Syrian military’s decision to begin operations is made. The hand of America and its allies will be cut off from southern Syria just as it was eastern Ghouta, which will reactivate a lifeline to Syria in general. Victory will be declared no matter how much America and its allies scream.

In a few weeks or perhaps days, military operations will be launched by the heroes of the Syrian army and its allies in order to raise the flag of victory from the Nasib Border Crossing, passing through all of Daraa and Quneitra, sending a message of the strength and steadfastness of the Syrian people, with their noble blood to the world. Syria will become strong once again with the efforts of reconciliation and forgiveness among its people, who will build up their country behind the leaders of their state and far from those who have betrayed the country and looted and robbed its riches.