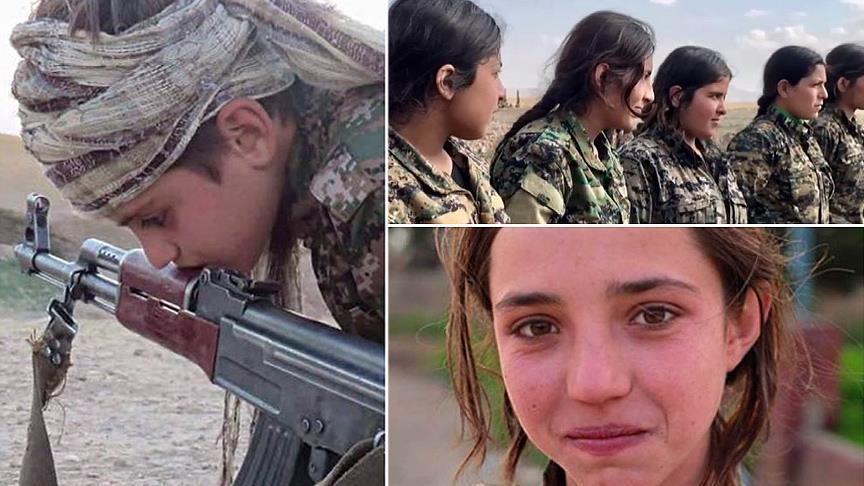 With military clothing and a machine gun on her shoulders, Fatima returns to her home and to her mother in the city of Manbij after 60 days of an absence, which in the eyes of her family was unjustified. Her mother spent these days searching every corner of the city, and did not leave a street or city or police station or a friend without asking about her 17-year-old child — but to no avail. Fatima and been at a camp for the Women’s Protection Units (YPJ).

“We would have preferred her to have been lost,” the mother tells us after calling us over. She is a “stranger” to Manbij, and was coming from one of the villages and needed someone to listen to her complaints after she failed to prevent her daughter from going to join the YPJ, the women’s military wing of the Kurdish Democratic Union Party (PYD), which she joined secretly after going to their headquarters in the village of al-Kirstan northeast of Manbij.

The Manbij Military Council announced that more than 50 young men and women graduated as members of the Council’s internal security organization in April of this year. It had previously announced that 30 Arab women had graduated in March 2017 and had been included in the YPJ ranks after undergoing a military course at their training camps in the town of al-Sheioukh 30 km southwest of the city of Ayn al-Arab. Fatima was one of these women.

Fatima’s mother, who lost her son in a bombardment on the village and her husband who went to work in Lebanon after Islamic State took over in 2015, was this time not able to account for her daughter, who returned armed with weapons and friends from the YPJ, along with the “comrade” commander responsible for them. The eyes of their neighbors, who hid their faces out of fear of repercussions continued to follow them around during the visits. But none apart from the stricken mother cared about this. She was still preoccupied with “the neighbors’ eyes, devouring us and talking about us.” The strange scene, uncommon in the city, and the daughter’s absence from the house for this period, harmed the family’s reputation. Umm Fatima beats her hands on her face and screams, “Fatima has become a soldier.”

Although the Kurdish YPG/YPJ have signed a law forbidding the conscription of children, they have continued to do so. There are no human rights groups monitoring the inclusion of children — especially women under 18 — with activists in areas under their control recording dozens of cases. It can be said that the SDF in Manbij and the areas of the Euphrates basin and the Syrian Jazira have tried to impose a social system, sometimes through military force, and at others through enforcement.

After the rule of ISIS emptied the area of its young men, who fled out of fear, or to find a living in neighboring countries, forces have exploited the family problems in the area to propagate its social system. They have bolstered the idea of women’s “freedom”, encouraging them to relieve themselves of the burden of their family’s guardianship, which is absent in practice due to the lack of guardians (noting that Manbij is a city in which women have been fortunate in terms of education and respect). This is not to mention the harsh material conditions which residents are enduring, especially those who were displaced to Manbij from the countrysides, which has given the forces wide room to maneuver, as well as playing the chord of vengeance against ISIS to influence those of a young age (men and women), or enticing them with power, money and freedom of movement.

Fatima is proud of her decision to join the Kurdish YPJ and spoke about the training camp she went to in Ayn al-Arab where she received intensive training for 60 days in weapons use — most notably, sniper rifles — as well as ideological and political training in accordance with the ideas of the PYD, before graduating as a YPJ fighter.

Fatima is currently working in the local police force known as Asayish in the city of Manbij, and leads military patrols. She also leads guard patrols in the vicinity of local council offices in Manbij. She receives a monthly salary of about 200 dollars, and enjoys broad authority over her peers in the city. She has begun to move normally in her military uniform, leaving her mother, whose husband left her alone since he heard the news, to lament her luck.