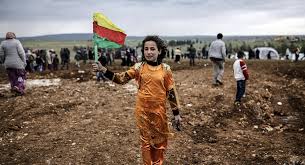 Washington did not stand with its allies, the Kurdish People’s Protection Units (YPG) — the military wing of the Kurdish Democratic Union Party (PYD), which Turkey classifies as a “terrorist organization” — in the region west of the Euphrates when Turkey began Operation Olive Branch in Afrin. Reports also indicate that it will not stand with the militia in Manbij, which has raised questions about whether Washington has let down its Syrian Kurdish allies and exploited their issue for their own benefit, while the YPG is accused of trying to set up a separatist entity.

The official spokesman for the National Democratic Gathering in Syria (a Kurdish coalition), Midas Ezizi, believes that the Americans have not abandoned their promises to the PYD, because the Americans were clear from the beginning that their relationship with them would not be greater than the fight against the Islamic State (ISIS).

Regarding relations between the United States and the Kurdish parties, Ezizi said in an interview with Sada al-Sham that it was natural that the United States would not forsake its relationship with a strategic country such as Turkey, versus its relationship with a “political party”, because Turkey has a strategic position and is a powerful NATO country with a strong economy, which means that America’s interests will lie more with it than with the PYD. He said that it was this reason that pushed the Americans to remove the PYD from Manbij, in an attempt to find a balance in its relationship with the Kurds and the Kurdish parties.

Ezizi rejected abbreviating the Kurdish people in Syria as the “Kurdish PYD”, saying: “Syria is for all Syrians and the national state should not have any description, not Arab, Kurdish or otherwise — but for everyone.”

He said that the PYD had contributed to distorting and harming Kurdish issues and deviating it from its course through a number of actions, including their relationship with the Assad regime that has become obvious to everyone, in addition to the party’s forces entering into areas beyond the borders of the Kurdish presence, such as Raqqa, Manbij, Deir ez-Zor, Managh, Maraa and other areas. He said this was a strategic mistake regardless of the noble goal that the party was claiming, which was removing ISIS.

A few days ago, the former co-chairman of the PYD, Salih Muslim, said that relations with Washington were not eternal, saying that alliances were open to everyone, including the Syrian regime.

Muslim added that “there has already been a conspiracy against Afrin, and the Turks were allowed to take it in exchange for the removal of armed groups from eastern Ghouta, amid international silence about the massacres carried out in Afrin, and now there is an American-Turkish agreement around Manbij. But in Manbij there are two military and civilian councils who will decide their affairs and we trust in their abilities to defend it.”

He said that relations with the United States were determined by shared interests such as eliminating ISIS, adding that these relationships were not eternal and that they could change.

He continued: “Our doors were always open to everyone. We have seen a change in Assad’s rhetoric recently. Two months ago he was describing us as terrorists and now he is talking about negotiations. This is progress.” He added: “Just as everyone thinks about their interests, we will think about ours as well.”

Ezizi said that the Assad regime after evicting residents from the Damascus countryside had turned its eyes to Daraa and Idleb, and feels that a turning point in Syria that could put the balance in its favor was a relationship with the PYD and winning it over to its side.

In this context, Ezizi continued: “Despite the weak position the regime has found itself in over the last seven years, it has still not recognized the Kurds or the Kurdish issue.” Salih Muslim’s mission may be an attempt to find an umbrella for a united Kurdish political decision to discuss with the regime, because dialogue with the regime by a single party will be costly for the Kurdish parties. But what is still unknown is the US position about these negotiations.