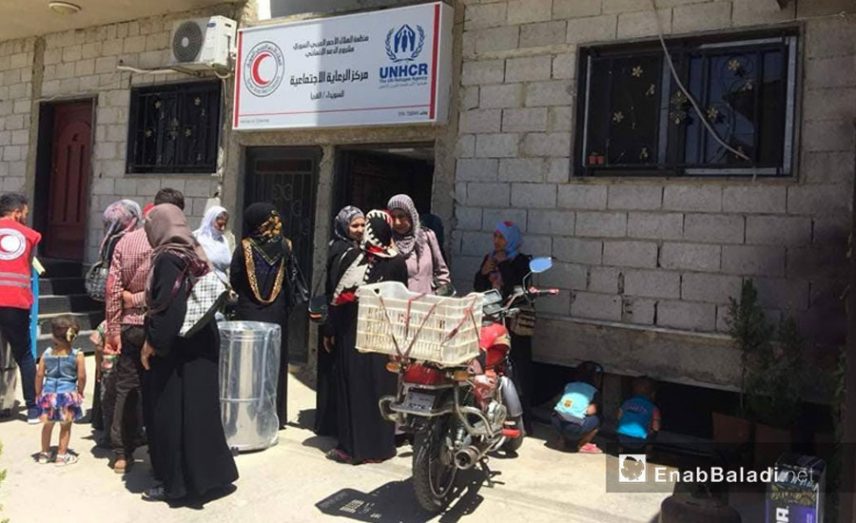 Residents and activists from the province of Suweida and humanitarian organizations are preparing to receive and help displaced people from Daraa, and put an end to the discord that the regime has created between the two neighboring provinces, after the intensive military campaign in Daraa.

Local organizations and NGOs set up shelters to accommodate the large numbers of internally displaced people from Daraa, following the advance of the regime forces, which pushed thousands of people from Daraa to leave their homes, villages and cities for fear of reprisals.

Syrian organizations and the UNHCR decided to set up shelters in the village of Al-Qrayya, in the southern province of Suweida, which will accommodate about 1,000 families by converting a soccer field, which formally belonged to the Baath affiliated Youth Association.

In parallel with the organized relief work, the people of Suweida have taken it upon themselves to support the displaced, with small groups that are working to assist the needs of new arrivals to the shelters.

Using Facebook, a group of residents in the city of Shahba and an a relief initiative called Bayti Ana Baytak (My House is Yours) both made requests for urgent donation of household equipment or any kind of furniture to respond to the increasing movement of civilians that were forced to leave their homes in a hurry.

Additionally, the Committees of Citizenship and Civil Peace issued a statement calling for the “protecting of the civil peace and emphasizing coexistence between the two governorates (Daraa and Suweida).”

The Rally of Opposition National Forces in the province issued a statement with a sharper tone condemning the regime's attempts to "promote strife, albeit at the expense of the lives of innocent people."

The statement blamed the regime openly for the "sporadic shells that fell on the governorate during the past two weeks" and declared "unconditional solidarity with the residents of the Horan Plain."

Over the past two weeks, activists in Suweida have been using the hashtag "I am from Horan" in their publications on various social media sites to express their solidarity with the people of Daraa, pointing to their helplessness at what is happening.

A large number of residents of Suweida, inside and outside the province, changed their personal pages on Facebook to become a red background with the words "I am from Horan", while some of them used a picture that included the flag of revolution and said "I am from Daraa.”