While the Syrian Democratic Forces maybe in control of the oil fields, it is believed that due to a lack of technology, they are unable to operate at full capacity writes Ain al-Medina 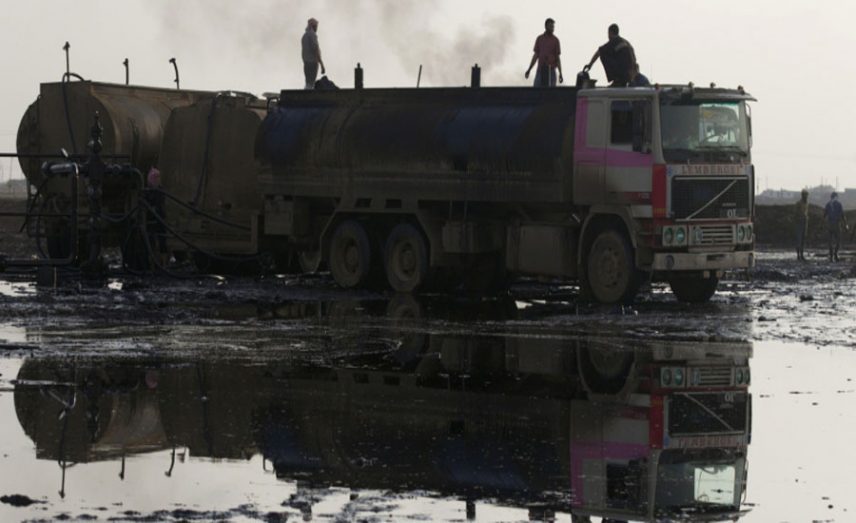 Monopolizing the oil and gas resources in the areas under the control of the Syrian Democratic Forces (SDF) in Deir ez-Zor province is one of the main aims of the Assad regime.

The regime has tried a number of times since fall last year to reach the oil fields, but the participation of the International Coalition alongside the SDF, as part of the fight against the Islamic State (ISIS) on the eastern side of the Euphrates River, where the major oil fields lie, has derailed the regime’s attempts. However this has not prevented them from taking a “balanced” share of the production of these fields, through intermediaries, with businessmen and a member of the parliament named Hossam al-Qaterji at their forefront.

For about seven months, since they took control of the major oil resources in Deir ez-Zor, the Self-Administration has failed to manage these resources, and daily production rates have returned to their previous levels under ISIS control. This is due to a lack of technology, which is needed to maintain the productive and auxiliary wells, especially following the air raids by the International Coalition during the last two years, carried out against ISIS positions, which had controlled fields and wells and oil stations on the left bank of the Euphrates.

Like ISIS, the Self-Administration considers figures related to oil, such as production and financial returns, to be secret, which makes it hard to arrive at total estimates which are close to reality. Despite that, estimates from former workers in the province’s oil sector, say that the production of Deir ez-Zor’s oil fields and wells in the section under SDF control does not exceed 30,000 barrels per day.

In the first months of SDF control, trucks from the Energy Authority, the official agency in charge of the oil and gas sector in the administrative structure of the Self-Administration, transported equipment that had not been affected during the destruction of the al-Omar oil field (45 km east of Deir ez-Zor) to Hassakeh province.

The oil wells were guarded by members of the SDF or civilian contractors, some of whom sold oil at inflated prices, for their personal gain, to local traders and basic oil refineries. This was before the SDF, represented by the Self-Administration, imposed a sort of organization on sales, especially in the fields in the Al-Jazira desert and north of the town of Khasham, where three investors (two from Deir ez-Zor and a third from Hassakeh) manage the wells. The rate the three investors shared with the Self-Administration was about 700 barrels of fuel produced at basic refineries for every 2,000 barrels of crude oil produced from these wells.

With the presence of American forces (which lead the International Coalition) and their deployment in areas under SDF control, it is impossible for the Assad regime to impose its control over any of the oil and gas fields, wells and facilities on the left bank of the Euphrates. It recently has appeared that the regime has acclimated to this situation, and has changed its strategies, if only temporarily, to try to make beneficial agreements with the Self-Administration in the oil sector (as in other economic sectors).

The regime and the SDF both know the other’s need for this division. The first needs the oil to supply the areas under its control with their fuel needs and the gas to operate the electrical generator stations, with its motives bolstered by the beginning of the imposition of economic sanctions the American administration has announced on Iran, which will deprive the regime of a major source of oil.

The SDF for its part is trying to increase the quantities produced by depending on the capabilities and experience of companies under the regime’s Oil Ministry’s authority. The news circulating about the arrival of engineers from the ministry to prepare technical reports monitoring the damage inflicted to the oil facilities in SDF-controlled areas of Deir ez-Zor is probably true. This came before its engineering teams launched partial work, according to its capacities, to maintain and rehabilitate the oil facilities, transportation, treatment and oil collecting systems in the main oil fields. The two sides will divide the daily production of the field.